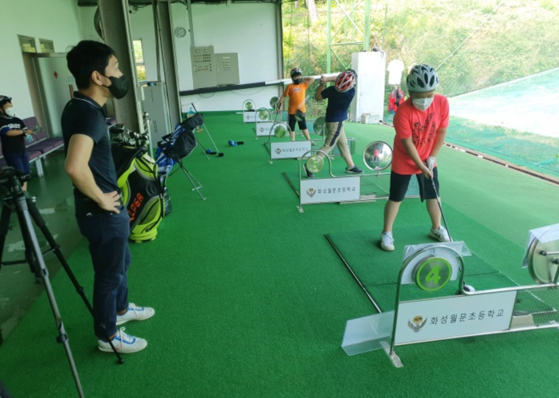 Students at Hwaseong Wolmun Elementary School in Hwaseong, Gyeonggi, are learning golf during gym class. The school established its own golf facilities in order to differentiate itself from other schools in the region and attract more students. The school’s golf program has helped Hwaseong Wolmun Elementary School to stay open amid a declining number of students in Hwaseong city due to the aging society. [HWASEONG WOLMUN ELEMENTARY SCHOOL]


Kim Yeong-hee, a mother of a 16-year-old living in Deokjeok Island, Incheon, is worried that her daughter may not have a high school to attend next year after many schools have recently closed down.

Deokjeok High School is the last high school remaining on the island. But with only 14 students, it, also, is on the verge of shutting down.

To address the issue of school shutdowns due to a lack of students, Kim Hak-yong, a 69-year-old living in Incheon who retired from his position as Dongguk University’s baseball coach, proposed converting Deokjeok High School into a specialty baseball high school by creating a school baseball team.

Around 800 residents signed a petition to create a baseball team in Deokjeok High School, which was then submitted to the school.

After weeks of consideration with Incheon City Office of Education, the school announced early this month that it will approve former coach Kim’s proposal and establish a baseball team in Deokjeok High School.

“The team needs at least 14 students to get approval from the Korea Baseball Association,” said Park Gap-jun, sports director of Deokjeok High School.

“Our goal is to gather 30 new students for the team and enter high school baseball competitions next year.”

Deokjeok High School is not the only school to introduce specialized programs to keep its doors open.

Another school in Hwaseong, Gyeonggi, created a golf team to gather more students.

“The program is very popular among our students, so we have opened the golf facilities to after-school hours as well,” Bae said.

Yeongbuk High School in Pocheon, Gyeonggi, decided to use its location to its advantage and added specialized military-related classes and programs, as the school is located near military bases in Gyeonggi.

The school offers two specialized courses on the military and routinely collaborates with the nearby troops to offer a three-day real-life experience of what it is like to be a voluntary career soldier.

Last year, Yeongbuk High School also converted their department of business information into the department of drones to appeal to more students.

Such a specialized department not only prevented the school from closing down, but also made it popular pick in all of Gyeonggi, according to the school's staff.

While some schools may be experiencing an increase in the student numbers with the addition of specialized programs, some education professionals caution that it may just be a temporary phenomenon.

“While the creation of sports teams to gather new students is a good idea, it may just be a temporary expedient as teams can easily face financial problems and dissolve,” said Kim Sung-cheon, professor at Korea National University of Education.

“Schools and local governments should be more concerned about retaining the younger population in the rural villages or towns even after they finish schools.”

'I welcome the plan if it reduces the cost of education'