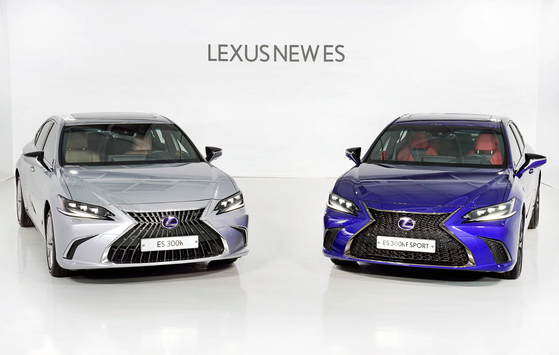 
Lexus Korea announced a partially revamped ES 300h hybrid sedan on Monday as the Japanese carmaker looks to boost its stagnant sales in the local market.

"In 2021, 99 percent of Lexus Korea sales were hybrid models, which I believe is the evidence that Korean customers value highly of Lexus' hybrid vehicles."

The new ES 300h has an upgraded driving assistant system including a pre-collision system which can now detect a wider area in front of th car compared to earlier models. The introduction of what Lexus calls dynamic radar cruise control also allows the vehicle to slow down on its own on curved roads.

Inside, the 12.3-inch infotainment screen in the center is now touchscreen.

With upgraded suspension and dampers, the latest ES 300h offers a smoother ride, according to Lexus Korea.

Lexus, alongside other Japanese carmakers, has been struggling in Korea in recent years. One reason for the decline in sales is the negative sentiment toward Japanese products.

Its sales rebounded slightly this year.

On the back of the model's popularity, Lexus Korea on Monday also launched the model's high-performance version, the ES 300h F Sport. The new version has an adaptive suspension and sporty driving mode as well as its own F Sport emblem and mesh-patterned grille.

SUVs and EVs coming to market en masse in second half

IBM says goodbye to hardware business and hello to software