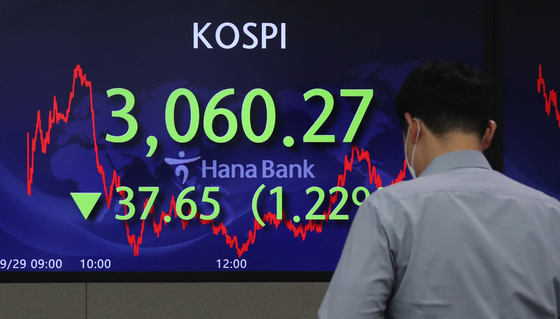 A screen in the Hana Bank's trading room in central Seoul shows the Kospi closing at 3,060.27 points on Wednesday, down 37.65 points, or 1.22 percent, from the previous trading day. [NEWS1]


Stocks slumped for second straight day to lose more than 1 percent Wednesday amid concerns about spiking bond yields and the U.S. debt ceiling. The won rose against the dollar.

Trading volume was moderate at about 812 million shares worth some 15 trillion won ($12.7 billion), with losers outnumbering gainers 676 to 215.

Korea's daily new Covid-19 cases surged to 2,885 on Wednesday, the second-highest tally since the outbreak of Covid-19 in January last year, as cases soared in the greater Seoul area.

The local currency closed at 1,181.8 won against the dollar, down 2.6 won from the previous session's close.