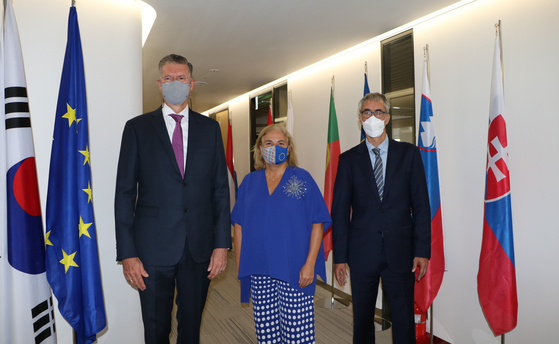 Dirk Lukat (left), chairman of the European Chamber of Commerce in Korea (ECCK) and CEO of Schenker Korea, Christoph Heider (center), president of the ECCK and Maria Castillo-Fernandez, Ambassador of the European Union to the Republic of Korea pose for photos prior to the online press conference held on Wednesday morning for the publication of the ECCK's annual White Paper . [ECCK]


The European Chamber of Commerce in Korea (ECCK) issued over 100 policy recommendations to the Korean government in its annual White Paper, which was published on Wednesday.

The ECCK has been publishing a White Paper every fall since 2015, delivering recommendations from European companies to improve the Korean business environment for international companies. This year’s White Paper includes 114 key issues across 16 different business categories, including automotive, liquor, cosmetics, fashion and retail, food, healthcare, insurance, energy, environment and ICT.

ECCK committee members gave examples of regulations they hope will loosened and called for penalties to be equal for foreign and local companies.

“When it comes to mislabeling food, local companies are forced to stop production for a while, like six days, as a penalty,” Karsten Kuehme, ECCK Food Committee Chairperson and CEO of Nestlé Korea, said.

Korea has tight restrictions when it comes to online liquor sales. According to Matthew Holmes, chairman of ECCK's Wine & Spirits Committee and representative director of AE Brands Korea, Korea is the only one of two countries in the Organisation for Economic Cooperation and Development (OECD) that doesn't allow liquor to be sold over the internet.

"The committee encourages ongoing engagement and discussion between the relevant regulatory bodies and industry in order to identify a solution for full e-commerce access for alcoholic beverages, with appropriate systems put in place to ensure age verification and responsible service of alcohol," Holmes said.

The ECCK included in the list of recommendations: simplifying the administrative process when it comes to importing and providing subsidies for eco-friendly vehicles; easing pharmaceutical regulations to encourage the development of Covid-19 treatment drugs; less regulation related to energy and recognition of product certifications that have been given from EU. 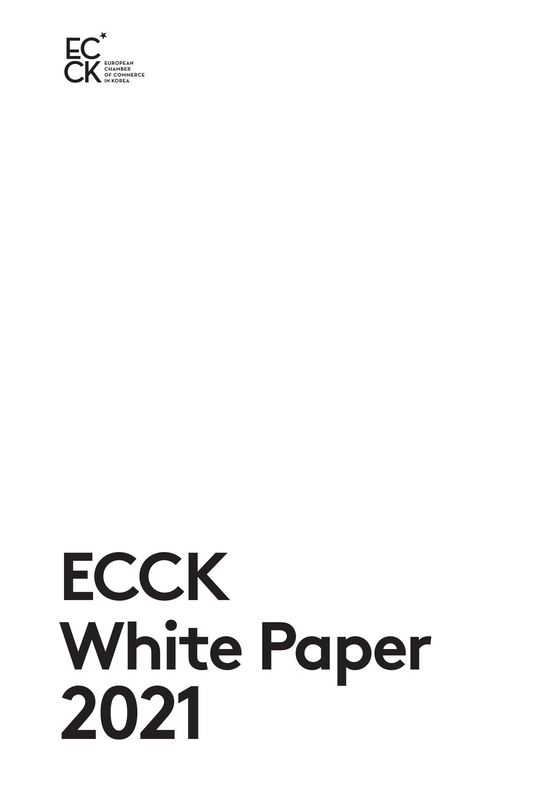 
“There are still many cases in Korea where rules and regulations that affect foreign and domestic businesses change too quickly without adequate input from stakeholders,” said Dirk Lukat, Chairman of the ECCK.

“In many instances, the new policies lack the adequate evaluation on whether they will have the desired effect without unintended consequences. To attract and maintain long-term investments, it is important that the government creates an appropriate corporate business environment.”

“The EU and Korea share similar views about global trade that we oppose protectionism and support the multilateral, rules-based system,” said ambassador Castillo-Fernandez.

“The EU hopes that EU companies will be in a position to compete with Korean companies on an equal footing.”

The ECCK also urged leniency regarding Covid-19 testing and vaccination. The government should ease testing and quarantine measures towards those who have been fully vaccinated either in Korea or in their home countries, and provide more flights to international airlines.

"We also would wish to see that vaccination certificates issued overseas are accepted by the Korean administration and vice versa to allow all inbound travelers to benefit from the facilitation offered to fully vaccinated people," said ECCK president Christoph Heider.