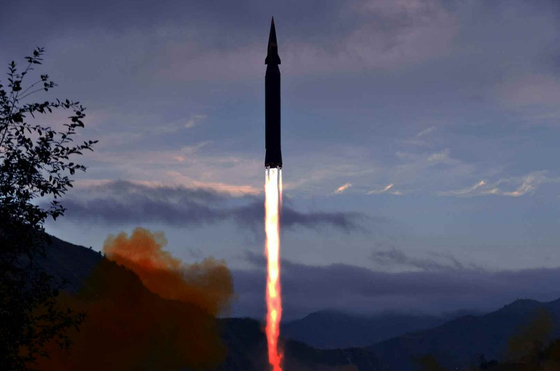 
North Korea said Wednesday that the missile it tested the day before was a new hypersonic missile called Hwasong-8.

Calling the Hwasong-8 one of the "five most important" new weapons systems envisaged in a five-year military development plan, KCNA referred to the missile as a "strategic weapon" that enhances "the nation's capabilities for self-defense in every way."

The launch Tuesday also marked the North's first use of a missile fuel ampoule, according to KCNA. Missile fuel ampoules refer to containers pre-filled with liquid fuel, which can be stored for months before being loaded onto missiles for immediate use.

Such technology greatly reduces the time needed to prepare a missile for launch compared to conventional liquid fuel-powered missiles, which require hours of pre-fueling.

Both the North's claimed development of a hypersonic missile and introduction of the missile fuel ampoule pose escalated threats to existing South Korean and U.S. missile defense systems.

While the North's new missile is believed to lag behind the capabilities of hypersonic missiles developed by the United States, Russia and China, the KCNA said the Tuesday launch confirmed "the maneuverability and the gliding flight abilities of a detached hypersonic gliding warhead."

Existing missile defense systems would have difficulty intercepting a missile flying at speeds at or above Mach 5, which is the speed of currently deployed hypersonic missiles around the world.

Experts have called the new development a "game-changer."

Nevertheless, South Korea's Joint Chiefs of Staff (JCS) said the Hwasong-8 was still a weapon in development, and a considerable amount of time remained before it would be ready for actual deployment.

The JCS also said that South Korea and the United States are capable of detecting and intercepting the new weapon at its current speed, which is reportedly around Mach 3.

The Hwasong-8 test-launch marks the country's third missile test this month, following tests of new cruise missiles over the weekend of Sept. 11-12 as well as two train-launched ballistic missiles on Sept. 15.

Under United Nations Security Council resolutions, the North is prohibited from testing ballistic missiles but not cruise missiles.

Mr Kim said the country was "building up our national defense in order to defend ourselves and reliably safeguard the security and peace of the country."

The North has bristled at characterizations of its weapons development program and associated tests as "provocations."

Kim Yo-jong, the powerful sister of North Korean leader Kim Jong-un, said in a statement Saturday that Pyongyang could take steps to improve relations with Seoul, including an inter-Korean summit and the reestablishment of the joint liaison office, if the South abandons its "hostility" and "double standards" – a term interpreted by analysts to refer to the South's own missile development program and joint exercises with U.S. forces stationed on the peninsula.

She called on Seoul to use "prudence" in the use of the terminology "provocation" if it wants to improve inter-Korean relations, warning it may "trigger a war of words."