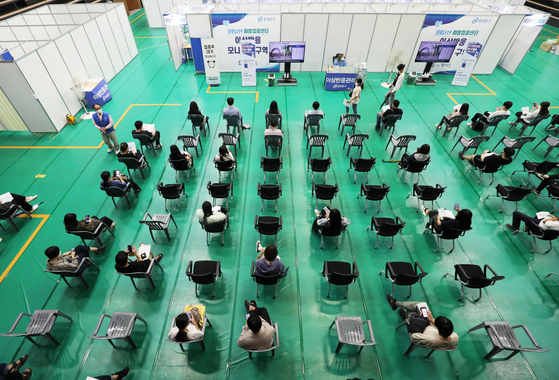 People wait to receive jabs at a Covid-19 vaccination center in Dongdaemun District, eastern Seoul, on Wednesday. Unvaccinated people can reserve for a shot until 6 p.m. Thursday on the Covid-19 reservation website (https://ncvr.kdca.go.kr). [YONHAP]


The government warned unvaccinated people they may not be allowed into bars or movie theaters as Korea starts preparing its "living with Covid" strategies.

“If [a Covid health pass system] is introduced in Korea, it is likely that unvaccinated people will be restricted from using public facilities or participating in events unless they present a negative PCR test result,” said Son Young-rae, a senior epidemiological strategist at the Central Disaster Management Headquarters, during a briefing on Wednesday.

Among 108,646 Covid-19 patients aged over 18 infected from July 4 to Sept. 19, 93 percent were found to be either unvaccinated or only partially-vaccinated, Son said.

The government hinted that it is in the “administrative stage” of coming up with a type of Covid health pass, or “vaccine pass” similar to those starting to be used overseas.

In France, for example, people must show a vaccine pass to enter bars, restaurants, cinemas, theaters and for travel on long-distance public transport.

“Many foreign countries operate vaccine passes not only for fully vaccinated people but also for those who haven’t been vaccinated by acknowledging a negative PCR test result for as long as 24 hours, 47 hours or 72 hours,” Son said.

Health authorities said they are considering expanding the scope of such vaccine pass benefits to those who have recovered from Covid-19.

“A lot of people overseas have [recuperated] from Covid-19 after getting infected, and they are often acknowledged for [vaccine passes] for about six months, just as if they were vaccinated,” Son said.

“It will be necessary to further discuss how to determine the scope of vaccine passes while continuing to analyze such cases and verify the medical validity.”

Regarding concerns that vaccine passes may cause discrimination against unvaccinated people, Son said, “It is necessary to separately consider measures for those who haven’t been given vaccination opportunities such as younger people or students.”

Despite a recent surge in daily Covid-19 infections — leading to record counts of over 3,000 — the number of critically ill patients or deaths are declining, health authorities confirmed Wednesday. 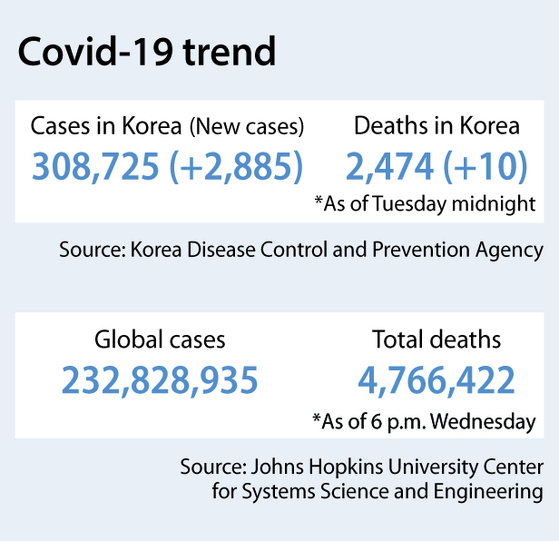 According to the Korea Disease Control and Prevention Agency (KDCA), Korea added 2,885 new Covid-19 cases on Wednesday, which was the second highest daily caseload ever reported in the country. Of them, 2,859 were locally transmitted, with the country's total caseload coming to 308,725.

The number of patients with serious symptoms reached 331, while 10 more virus deaths were added.

“Since the Chuseok holiday, the number of infections has continued to be above 2,000 for six consecutive days,” Interior Minister Jeon Hae-cheol said during a Covid-19 response meeting on Wednesday.

Jeon, however, added, “The weekly average of critically ill patients has decreased by 17 percent compared to the first week of September, and the fatality rate has also continued to decrease.”

“It can be interpreted as the effect of vaccination that is going smoothly thanks to the participation and cooperation of the public,” Jeon said.

Health authorities once again urged people who haven’t been vaccinated to reserve a vaccine through the Covid-19 reservation website (https://ncvr.kdca.go.kr) which is open until 6 p.m. Thursday.

According to the Covid-19 vaccination task force, only 6.1 percent of 5.88 million unvaccinated people aged over 17 made reservations during the additional booking period that began from Sept. 18 as of Tuesday midnight.

As the reservation rate remains low despite the government’s encouragement, health authorities are discussing additional measures such as offering outreach vaccination services.

“The spread of Covid-19 infections due to increased travel is very likely to become a reality [due to] the holidays in October,” Jeon said. “The government will extend the operation of temporary Covid-19 screening clinics at 17 traffic hubs across the country by one month until the end of October from Sept. 30.”