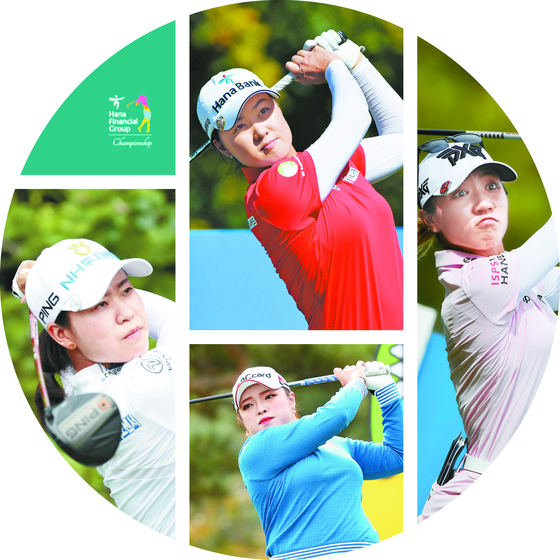 
The KLPGA Tour's Hana Financial Group Championship will tee off on Thursday at Pocheon Adonis Country Club in Pocheon, Gyeonggi.

In the 2021 edition of the Hana Championship, a total of 108 players will compete for the title, playing a total of 72 holes in Pocheon. The tournament will offer a total prize pot of 1.5 billion won ($1.3 million), with the winner taking home 270 million won.

The Hana Championship is the 23th of the 32 KLPGA tournaments this season. As the tournament has a big prize pot, the result could cause a major shift in the Tour's year-long rankings.

Not all 108 players take home a share of the winnings as there will be a cut after the first two rounds, with only the top 60 players continuing.

Even though the tournament will once again be played on an empty golf course due to the Covid-19 pandemic, the field is still just as competitive as previous years.

Heating up the competition for the trophy are the addition of LPGA golfers Minjee Lee of Australia, Lydia Ko of New Zealand and Yealimi Noh of the United States, all of whom threw their hats into the KLPGA Tour ring this week.


Minjee Lee brings her A game to the KLPGA Tour after winning her first LPGA major this July at the Amundi Evian Championship in France. She overcame a seven shot deficit on the final round to stretch the game into a sudden-death playoff against Lee Jeong-eun to clinch her maiden major title.

Minjee Lee headed right to the 2020 Tokyo Summer Games to represent Australia, where she finished tied for 29th and became a two-time Olympian.

World No. 6 Lydia Ko of New Zealand also joins Minjee Lee at Pocheon Adonis. Like the Australian, Ko also has one LPGA win this season. She won the Lotte Championship in April, cutting a winless streak of over two years.

Ko is the only female two-time Olympic medalist in history, with a silver medal from the Rio Games and a bronze from Tokyo.

Ko will be looking for her second KLPGA title in nine years, having won the Swinging Skirts World Ladies Masters in December 2013, defeating Ryu So-yeon, who currently plays on the LPGA Tour alongside Ko, by three strokes.

While Ko's appearance threatens the field as she is the highest ranked golfer, other KLPGA favorites like Park Min-ji and Jang Ha-na promise some serious contention for the prize.

After two weeks off, KLPGA favorite Park Min-ji will be looking for her seventh win of the season on her way to breaking Shin Ji-yai's record of nine wins in a single season. Park sat out the OKSavingsBank Se Ri Pak Invitational from Sept. 17 to 19 and last week's Elcru-TV Chosun Pro Celebrity due to a back injury.

"I think my back was strained because I overused it too much," Park said in a pre-tournament interview.

"During the last two weeks, I focused on resting and recovering so I feel much better. Since August, I have been playing okay but I still felt like there was something missing. I want to play well this time and figure out what it is that I am missing. My goal is to land within the top 10 on the first day and if I can achieve that, I will try to win."

Although she is in the middle of her own race for the history books, Park is also looking forward to the chance to compete against some of the LPGA's best.

"I'm really happy to compete with great players. I think there will be a lot to learn from the players who play on the world stage, and it will be a good experience for me."

Park has been dominating the KLPGA Tour this season.

She won her first title of the season at only the second tournament, the Nexen Saint Nine Masters 2021 in April. Just two weeks later, she pulled off the stunt of winning two consecutive events, the NH Investment & Securities Ladies Championship in May, then the 2021 Doosan Match Play Championship just a week later.

Two weeks after that, Park won another two tournaments in a row, the Celltrion Queens Masters and the DB Group The 35th Korea Women's Open Golf Championship, both in June.

Park won her sixth KLPGA title at the inaugural Daebo hausD Open at Seowon Valley Country Club in Paju, Gyeonggi on July 11. She tied for fourth at her most recent tournament, the KB Financial Group Star Championship.

The winner of that same tournament was Park's biggest KLPGA contender, Jang Ha-na, who is also having a good season, seeming to have found her form after winning the KLPGA major, her second win of the season. She won her first KLPGA title at the Lotte Open in June.

The KB Financial was Jang's 15th victory on the KLPGA Tour and, considering her strength toward the end of the season, expectations are high.

Jang will be hoping to carry on that same form and to repeat her glory from two years ago when she won the 2019 Hana Financial Group Championship title that took place at Sky 72 Golf & Resort in Incheon.

"Because the Hana Championship takes place at a different golf course than in 2019 when I won the event, it feels entirely new," Jang said in a pre-tournament interview. "I am curious to see how I play on the new course and what score I can card. Since it's burdensome to state that my goal is to win, I will try to land in the top five."

"Though I am a little disappointed that this is my only chance of defending the title this season, it feels new and different as it is my first time trying to defend my title," said An. "As always, my goal is to win. But I will try to have fun playing and to play my own game like any other tournament."

KLPGA golfer Ryu Hae-ran is also entering the field at the top of her game, having won both the individual and team trophy at the Elcru-TV Chosun Pro Celebrity 2021 tournament at Island Country Club in Ansan, Gyeonggi last week.

Ryu took her first trophy of the season after two additional holes in a sudden-death playoff against Choi Hye-jin. She also won the team trophy alongside golfer Kim Ji-yeong and singer Im Chang-jung with a team score of 14-under-par.

"I actually had pressure to play well this season because I received lots of attention last year for receiving the Rookie of the Year award," said Ryu. "My results were bad at the start, but last week I tried changing my mindset and was able to win. That makes me happy. I think I've finally turned things around. I will try and carry that form into my shots this week."