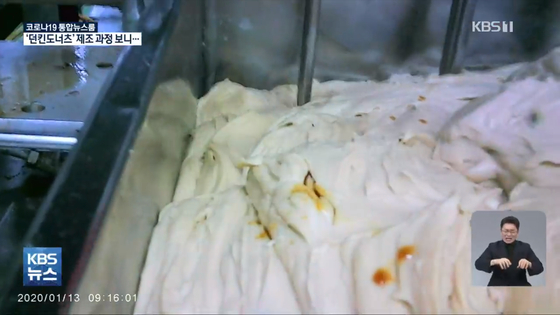 A video taken at a Dunkin' factory in Anyang, Gyeonggi shows orange-colored droplets on the dough used to make doughnuts. [SCREEN CAPTURE]


Dunkin' asked the police to investigate a video showing dirty conditions at its main factory, saying the company was being set up.

On Wednesday, KBS broadcast a video taken at a Dunkin’ factory in Anyang, Gyeonggi, filmed by an anonymous worker this summer.

The video showed the vent hood of a doughnut fryer caked in oil stains. Uncooked dough just beneath the vent had dark orange-colored droplets on it, which the employee said was oil that fell from the hood above.

Further footage showed black residue coming off another machine when wiped by an employee with a towel. According to the employee, the black residue was mold. The outside of the machine was covered in sticky yellow stains.

The video was first given to Rep. Kang Eun-mi of the Justice Party, who sent it to KBS. The video time stamp shows the video was taken in January 2020, but the employee said it was taken this summer and the date settings were messed up.

The video prompted a food safety inspection at the factory by the Ministry of Food and Drug Safety on Thursday.

Do Se-ho, CEO of BR Korea, an SPC Group affiliate that runs the doughnut chain in Korea, initially apologized on Thursday morning "for any concern caused regarding the report on [Sept.] 29." However, in the afternoon the company asked police to investigate, claiming the situation was faked by an employee.

Surveillance camera footage from July 28 shows an employee intentionally hitting the frying machine, making the oil droplets on the hood fall onto the dough. The employee was also seen scraping oil stains on the hood with a scoop and placing the oil on the dough.

BR Korea confirmed that the employee in the video is the president of the Korean Confederation of Trade Unions' (KCTU) Dunkin' branch.

SPC Group's franchise Paris Baguette is currently involved in a labor dispute with the KCTU. Korean Public Service and Transport Workers’ Union (KPTU) truck drivers have been on strike since Sept. 2 and refused to deliver ingredients. That union is part of the KCTU.

A BR Korea spokesperson told KBS following the report that they “clean the hoods every day, but the [situation in the video] happened because someone intentionally didn't clean the facilities.”

The spokesperson added that the orange-colored substance was left on the dough for the same reason and that the black residue from the machine wasn't mold, but oil stains.