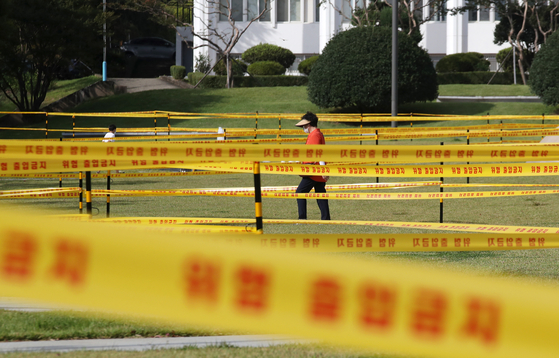 The lawn of Chonnam National University in Gwangju is taped off on Monday to restrict people from using it, in a move to prevent the spread of Covid-19. [YONHAP]

According to the Korea Disease Control and Prevention Center (KDCA), minors aged 16 to 17, or those born in 2004 and 2005, will be able to book a vaccine from 8 p.m. Tuesday until 6 p.m. on Oct. 29. They will be administered Pfizer shots at medical institutions nationwide from Oct. 18 to Nov. 13.

The second shot will automatically be booked three weeks after the first shot, which can be changed until two days before the appointment through the vaccine reservation website (http://ncvr.kdca.go.kr) or by calling the hotline (1339).

From January last year to September this year, the infection rate among children and adolescents in Korea was 464.9 per 100,000 people, the KDCA said in a press release on Monday. This is lower than the total infection rate — 572.8 per 100,000 people — but the number of patients, and therefore the rate, are increasing along with the spread of fourth wave of the pandemic.

High school seniors were the first minors in the country to receive vaccines, and the KDCA said the vaccine’s effectiveness in preventing infection in 16- to 18-year-olds was 95.8 percent, while the effectiveness in preventing the development of severe symptoms and deaths was found to be 100 percent. Among some 860,000 students, only 15 cases of myocarditis and pericarditis have been confirmed, from which all have recovered.

Health authorities advised in particular that children with underlying diseases get vaccinated, as they have a higher rate of becoming critically ill from Covid-19.

“In particular, children and adolescents with underlying diseases such as endocrine problems including juvenile diabetes and child obesity, cardiovascular diseases, and chronic respiratory diseases are known to have a two times higher risk of progressing into severe illness when infected with Covid-19 than healthy adolescents; thus, vaccination is highly recommended,” the KDCA said in a press release.

“In the case of healthy adolescents, it is recommended that they be vaccinated according to their wishes or those of a guardian,” it added, while reassuring that students won't be penalized at schools if they refuse to get vaccinated.

Students will be allowed up to three days off including the date of vaccination, which will not be docked from their school attendance. Any additional absences will be treated as “absence due to disease” if a doctor’s note is submitted.

To cope with the highly contagious Delta variant, reservations for booster shots of high-risk groups will also open at 8 p.m. Tuesday.

The elderly aged 75 or older, and patients and employees in facilities for seniors, who got their first shot on or after April 1 and finished vaccination at least six months prior, will be the first eligible to reserve a booster jab. Those who are eligible for reservation will receive a text message according to their previous vaccination schedule.

Booster shots will be given from Oct. 25 at medical institutions nationwide with an mRNA-based vaccine — Pfizer or Moderna.

“The KDCA decided to offer the same vaccine type as the initial jab [for booster shots],” Song Joon-young, a professor of infectious diseases at Korea University College of Medicine, said during a KDCA briefing on Monday.

People who received AstraZeneca as the first shot and Pfizer as their second will get Pfizer for their booster shot.

However, Song said, “There are no plans for mixing and matching Pfizer and Moderna shots.”

For those who received the Janssen shot — estimated to be more than 1.44 million — which only requires one shot, health officials said discussions are still underway for the need of booster shots.

“Booster shots are needed [for Janssen recipients] as their risk of catching the Delta variant is six to seven times higher,” Song said, adding, “As the data is insufficient, we will decide on the schedule after the research studies are released within two to three months and after discussing with the Vaccination Review Committee.”

Health authorities also advised pregnant women get vaccinated. They will be eligible to book a vaccine — either Pfizer or Moderna — from 8 p.m. on Oct. 8.

“Pregnant women are advised to get their Covid-19 vaccination as it is believed that the need and benefit are high,” Jeong Eun-kyeong, commissioner of the KDCA, said during Monday's briefing.

“Covid-19 vaccines are not ‘live vaccines’ that use bacteria with weakened pathogenicity or virus mutant strains that are still alive, so vaccination does not cause Covid-19 infection in pregnant women or fetuses,” it added. 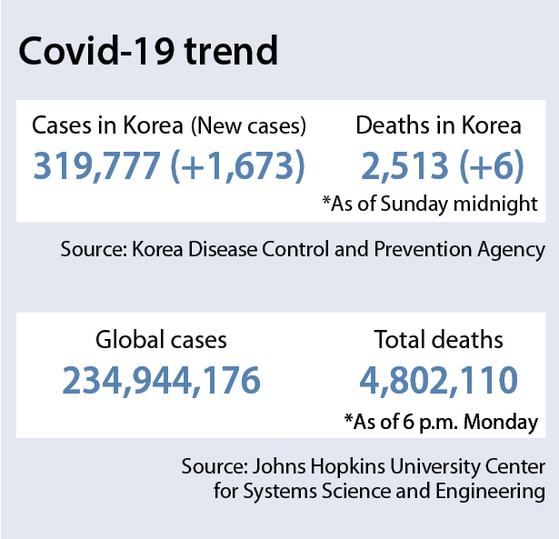 Fourth vaccine doses offered to everyone over 59