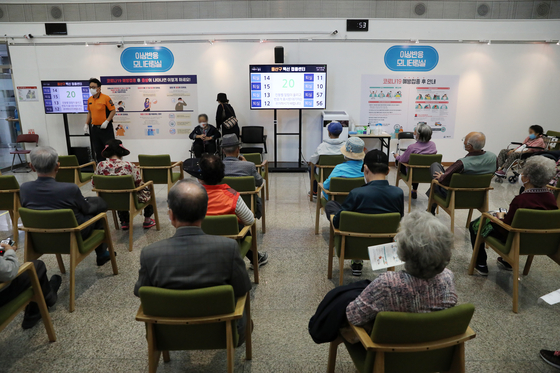 Senior citizens wait for any possible adverse reactions after receiving Pfizer shots at a Covid-19 vaccination center in Yongsan District, central Seoul, on Thursday. Reservations for people aged 60 to 64 opened Thursday, as well as for first and second grade teachers and teachers at day care centers and kindergartens. [NEWS1]


Korea kicked off Covid-19 vaccine reservations for the last group of people over 60 on Thursday, while the country’s Covid-19 cases shot up to 715, the highest since late April.

Those who wish to get their shot can make a reservation through the national vaccine registration website (ncvr.kdca.go.kr) until June 3. They can also sign up by calling the Korea Disease Control and Prevention Agency (KDCA)'s 1339 hotline or by visiting a local community center.

This group comes after opening reservations for those aged 70 to 74, which opened last Thursday, and between 65 to 69 on Monday. All in this group will be administered the AstraZeneca vaccine.

Starting May 27, members of the general public aged 65 to 74 will be administered their jabs, followed by those aged 60 to 64 and teachers of younger children from June 7. The whole group aims to finish inoculation by June 19.

While the country continues rolling out reservations for the older population, members of the public who previously received their first dose of the AstraZeneca vaccine will be eligible for their second dose from Friday.

Those who received their first AstraZeneca shots in or around February, including patients and workers at nursing homes and hospitals for the elderly under the age of 65, will be eligible for their second jab. The country estimates around 926,000 people are eligible for second their inoculation, which will be administered from May to June.

Health authorities added that people under 30, who received their first AstraZeneca shots before the age limit was imposed on the vaccine due to concerns over rare cases of blood clots, will also be eligible for their second dose. The second shot won't be made mandatory; however, they cannot get their second shot with a different vaccine, they said.

As of Thursday, a total of 3,711,023 people, or 7.2 percent of Korea’s population, had received one dose of a Covid-19 vaccine since the vaccination program began on Feb. 26.

The government has been focusing on procuring more vaccines to speed up the vaccination campaign, which has been lagging in recent days due to vaccine shortages.

The country is also set to receive 835,000 doses of the AstraZeneca vaccine secured through the Covax Facility, the World Health Organization's vaccine-sharing mechanism, on Thursday.

This is part of the total amount of 2.12 million AstraZeneca vaccines for 1.051 million people that are scheduled to be introduced in the first half of the year from the Covax Facility. So far, 432,000 doses have arrived.

After the pharmaceutical panel’s review, the next step is a final comprehensive review before the ministry gives the final approval to become the fourth company to be used in Korea — following AstraZeneca, Pfizer and Johnson & Johnson. 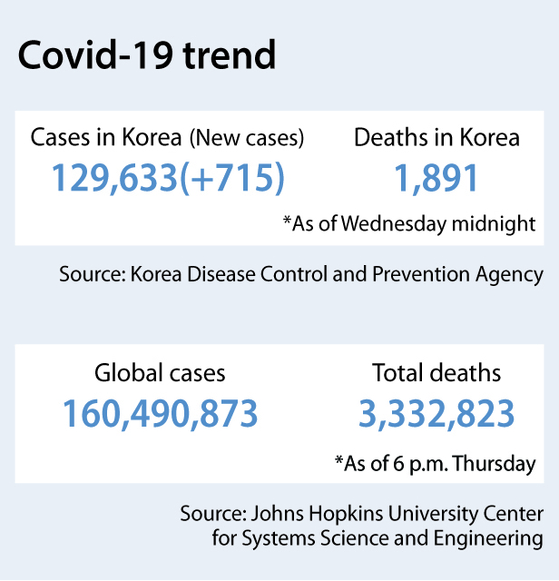 On Thursday, Korea’s daily new cases rebounded to over 700, the highest since April 28.

There were seven more fatalities, raising the total death toll to 1,891.