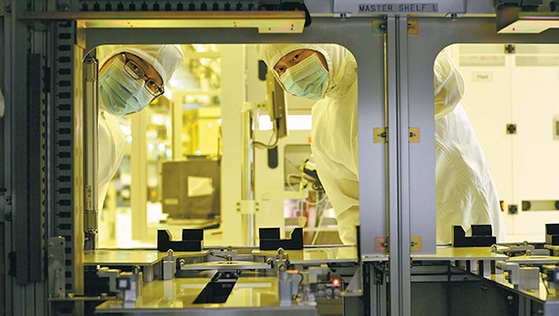 Semiconductor manufacturing plant in Icheon, Gyeonggi. Despite Japanese restrictions on the exporting of key materials used in semiconductor and display manufacturing since July 2019, Korea's imports of the materials have not declined significantly. [SK HYNIX]

The importation of three materials restricted for export to Korea by Japan has not dropped much, but overall trade between the two countries has declined.

In 2019, Japan required extra documentation for the sale to Korea of hydrogen fluoride, photoresists and fluorinated polyimide, which are essential in the manufacturing of computer chips and displays.

According to the Federation of Korean Industries (FKI) on Tuesday, imports of the three materials between the second half of 2019 and the first half of 2021 totaled $724.6 million.

The Korean government and companies took swift action, including diversification of sourcing, and cushioned the impact of the Japanese restrictions.

In the case of hydrogen fluoride, which is also known as etching gas, Korea’s dependency dropped significantly since the restrictions were put into place by the Shinzo Abe administration.

Purchases from Japan of the gas are down 32 percent as imports of the material from Taiwan and China increased and local companies increased their production of it.

Starting with the restrictions on the three key materials, the relationship between the two countries soured further, each removing the other from their whitelist of countries qualified for simplified approvals for trade in sensitive goods.

Korea’s exports to Japan fell 8.1 percent to $53.6 billion during the same period, while imports from Japan fell from $107 billion to $95.5 billion.

This year, Japanese beauty brand DHC pulled out of Korea after conducting business in the country for two decades.

“As the unprecedented conflict between Korea and Japan has continued for more than two years, the damage to trade, direct investment and personnel exchange has increased,” said Kim Bong-man, head of the FKI’s international affairs division. “As a new government has been formed in Japan, the situation needs to end as quickly as possible.”