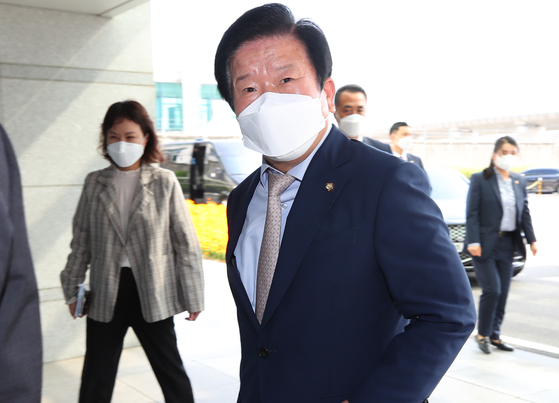 National Assembly Speaker Park Byeong-seug arrives at Incheon International Airport on Tuesday for his departure to attend the 7th G-20 Parliamentary Speakers Summit and the Pre-COP26 Summit in Italy. [YONHAP]


National Assembly Speaker Park Byeong-seug departed from Korea on Tuesday afternoon for his official visit to Italy and Egypt from Tuesday to Oct. 15.

During this period, Park will attend the 7th G-20 Parliamentary Speakers Summit in Rome and the preparatory meeting of the 26th UN Climate Change Conference of the Parties (Pre-COP26) held in Milan. He will also hold a series of bilateral talks with the parliamentary leaders of key nations and meet with the national leaders of Egypt to discuss collaboration regarding the economy and national defense in Cairo.

Park will also hold a series of bilateral discussions with the parliamentary leaders of the G-20 and invitational states, including Britain and Saudi Arabia, on outstanding issues including economic cooperation, throughout the Speakers summit.

Following the G-20 Parliamentary Speakers Summit, Park will participate in the Pre-COP26 Summit, hosted by the Italian Chamber of Deputies from Oct. 8 to 9. The National Assembly Speaker will share information on climate change and ideas on practical action plans for carrying out the Paris Agreement and the Convention on Climate Change with the parliamentary leaders of the member states.

After finishing the official agenda in Rome, Park will head to Egypt on Oct. 9. The official visit was made in response to repeated requests by Egypt, and it is the first time in 12 years for a speaker of Korea’s National Assembly to visit Egypt, since 2009.

Park will join in the invitational round table dinner for Korean businessmen in Egypt on Oct. 10 and participate in relay talks with the national leaders of Egypt the following day to discuss enhancing economic and national defense collaboration between Korea and Egypt.

Park is expected to consult with the national leaders of Egypt to facilitate support for Korean businesses to take part in Egyptian national projects. As Egypt maintains ties with both South and North Korea, he will ask for continued support on the Korean Peninsula Peace Process pursued by the administration.