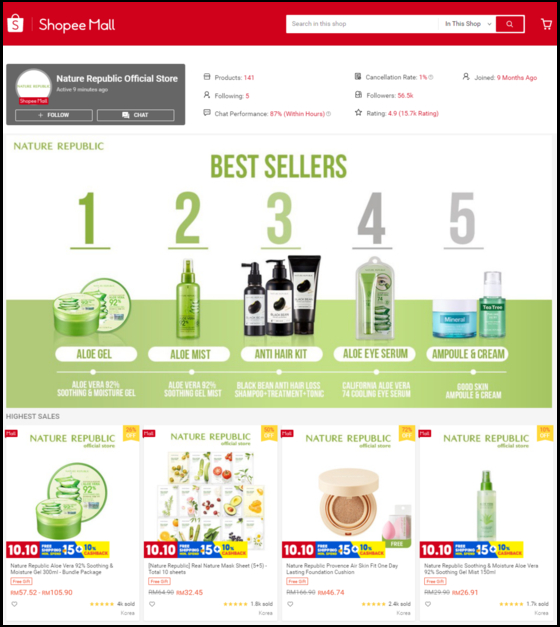 
For desperate Korean cosmetics companies hit hard by the pandemic, Southeast Asia has become the new land of opportunity.

The e-commerce market is growing fast there, with around 40 million people starting to use the internet last year.

Nature Republic, a Korean cosmetics brand, began selling its products on Shopee, Singapore-based e-commerce giant, last year. It was the company’s last hope to survive the pandemic after it had to close around 80 stores in Korea due a fall in sales amid the Covid-19 pandemic.

Its sales in South Asian countries including Singapore and Malaysia via Shopee jumped seven-fold as of September this year compared to January, with number of orders up 11-fold.

“We were hit hard in the domestic market due to the Covid-19, but are recovering again largely led by sales from the e-commerce site,” said a spokesperson at Nature Republic. “Southeast Asian countries have now become big markets.”

The size of e-commerce market in Southeast Asian countries, which was valued around $62 billion in 2020, is expected to reach $172 billion by 2025, according to a report published by Temasek, Singapore’s state-run investment company.

Shopee is currently the No. 1 e-commerce company in Southeast Asia. Its transaction volume broke 40 trillion won ($33.4 billion) last year, with around 2.8 billion orders made.

Sales of products from Korean companies on Shopee have been on the rise. In 2020, sales of Korean products on Shopee rose about four- to five-fold compared to the previous year.

“People from Southeast Asian countries highly prefer Korean products as K-content, such as K-pop and Netflix series ‘Squid Game,’ are gaining popularity there,” said a spokesperson for Shopee Korea. “They believe Korean products have great quality despite the cheap prices. Domestic companies have slowly been expanding their presence in Southeast Asian market."

Cosmetics and food are particularly popular.

Gangnam-based B2LiNK’s cosmetics brand Skin1004 has been ranked No. 2 in Shopee’s K-beauty category. Its overseas sales surpassed domestic sales so far this year.

Sales by Fatirkshop, a company that sells K-pop albums and merchandise, increased by 350 percent in only a year since it went on Shopee in 2019.

Sales of Amorepacific’s tea brand Osulloc on Shopee has increased four-fold as of September compared to January.

“Companies that wish to enter overseas market have to take high risk due to the pandemic, so they consider e-commerce platforms to get a foothold,” said a spokesperson for Shopee Korea. “We plan to come up with various programs to help more local companies to list on Shopee.”