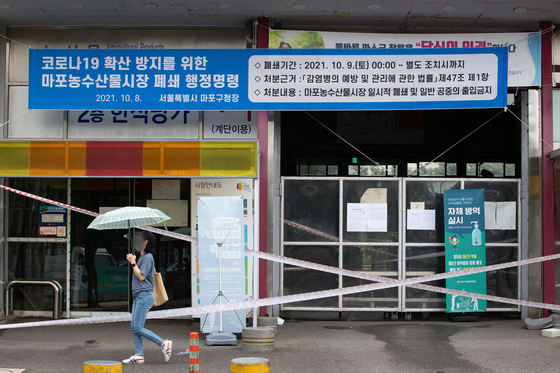 An entrance of the Mapo Agricultural and Marine Market in western Seoul is taped off on Sunday after the district office issued an administrative order for its temporary closure following an outbreak of infections at the market. [YONHAP]


Korea will form a government-private committee to discuss strategies to return to normal life and will hold its first meeting this week in preparation of starting its "With Corona" plan in November.

"With Corona" is the name for the government's plan of recovering peoples' normal way of life, similar to the "With Covid" strategy being discussed in other countries around the world.

The country also shortened the interval between the two Moderna vaccine doses and outlined preventive measures for the fall season, when many travel to the mountains to see the changing autumn foliage, while expanding home treatment for asymptomatic or mild virus patients.

The Central Disaster Management Headquarters announced Sunday that it will set up a Covid-19 Normal Life Recovery Committee and hold an inaugural meeting presided over by Prime Minister Kim Boo-kyum and a private representative by this Friday.

The Committee is expected to discuss strategies for a phased recovery to normal life in consideration of the vaccination rate and draw up a road map of specific social regulations by the end of this month.

Health authorities have reiterated that they will gradually ease the current social distancing measures and establish a new system to focus more on managing critically ill patients rather than all new infections, hoping to create a balance between regular life and quarantine regulations.

As of Saturday midnight, 59.3 percent of the country’s population had completed their vaccinations.

Health authorities on Friday announced plans to reduce the burden on the medical system in preparation for up to 10,000 daily infections, while strengthening quarantine measures to curb the virus spread.

In turn, home treatment for Covid-19 — which had been limited to underage patients and their guardians — will be expanded to include asymptomatic and mildly symptomatic individuals under the age of 70 who tested positive but are not deemed to be in need of hospitalization.

However, people whose living conditions do not allow them to effectively self-isolate, or who cannot maintain contact with health officials through the official mobile application, will not be allowed home treatment.

People who qualify for and choose to receive home treatment will have their condition evaluated twice a day by available medical personnel in their area. In the case that a home-care patient’s symptoms worsen, a 24-hour emergency response system will be on alert to transport them to a professional medical facility.

People using the at-home treatment must use a quarantine mobile application with a GPS for authorities to keep track of their whereabouts. Those who do not abide by the self-isolation policy and attempt to evade the official monitoring system will be required to wear a tracking device dubbed a "safety band."

Most patients, whether at home or hospitalized, will be released from quarantine 10 days after testing positive, for asymptomatic or mild cases, or 10 days after showing symptoms, for other cases.

If a patient's guardian or cohabitant is fully vaccinated, they will also be released from quarantine at the same time as the patient after taking a PCR test. Those who haven’t completed their vaccination must be quarantined for an additional 14 days, watch for any symptoms and take a Covid test before they are released.

To help speed up vaccinations, the government returned to a standard dosing schedule of the Moderna vaccine, of four weeks. Due to a series of delays in vaccine shipments during the summer, the gap between the first and second Moderna doses was extended to five or six weeks.

Those who want to advance their second dose appointment can change their schedule individually through the vaccine reservation website (ncvr.kdca.go.kr).

“The decision was made on the judgement that Moderna shots are sufficiently supplied throughout medical institutions,” Kwon Keun-yong, the director of the Covid-19 Vaccination Task Force's vaccination management, said Friday.

With such changes, the government expects that they will be able to attain its 70 percent fully vaccinated rate before the original goal of end-October.

Preventive measures for traveling during the fall have also been set in place for the five weeks from last Saturday to Nov. 14.

All passengers on tour buses must be put on a list, and singing and dancing inside the buses will be prohibited. The government plans to install 13 more temporary Covid-19 screening centers at entries of major mountains and national parks, in addition to extending the operation of 14 screening centers already installed on the highways.

The Seoul Metropolitan Government said Sunday that it notified the Korean Confederation of Trade Unions (KCTU), Korea's major umbrella labor group, that all of its rallies planned in different areas of the capital on Oct. 20 are banned, in accordance with the Infectious Disease Control and Prevention Act.

The KCTU earlier announced that it would hold a general strike on Oct. 20 to demand the abolition of non-regular workers and a full revision of the Labor Law. The rally is expected to attract 550,000 people from various labor unions. 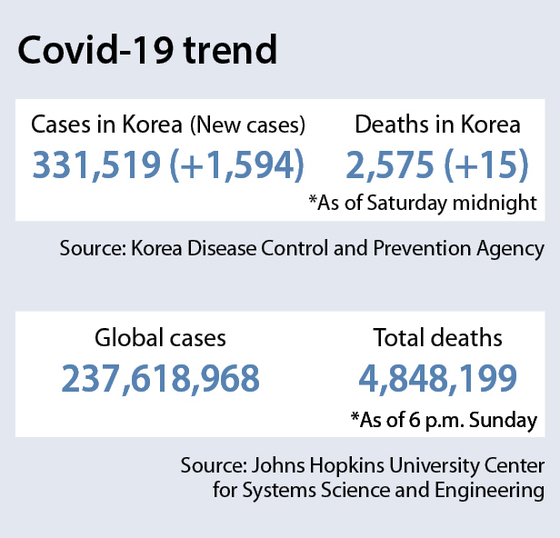 With the country accelerating its vaccination rollout, Korea is slowly opening its borders to more countries.


Korea and Singapore agreed on Friday to sign a Vaccinated Travel Lane, more commonly known as a travel bubble, after a similar agreement with Saipan kicked off in July.

From Nov. 15, Korean citizens can travel to Singapore without having to complete a mandatory seven-day quarantine on their arrival as long as they are fully vaccinated at least 14 days before their departure. Vaccinated Singapore citizens will also be exempt from the mandatory 14-day quarantine when they travel to Korea.

Citizens of both countries that are vaccinated with shots approved by the World Health Organization (WHO) are eligible. Travelers will need to carry their vaccine certificate, a negative Covid-19 test result — done within 48 hours before departure time for Korean citizens and 72 hours for Singaporeans — and travel insurance. Travelers will be tested again once they land.

'Travel bubbles' to start with a whole lot of rules