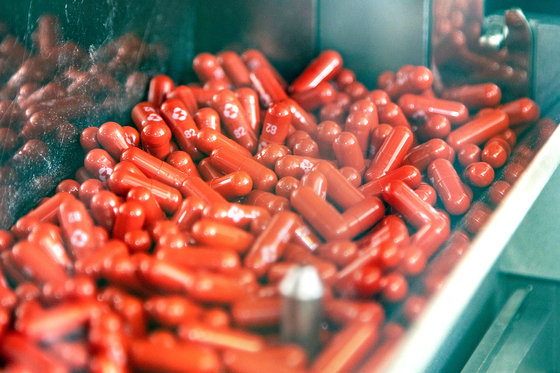 Molnupiravir, an oral Covid-19 treatment that is under development by MSD. [AP/YONHAP]


Game-changing Covid oral treatments being announced by multinationals are knocking the stuffing out of biopharmaceuticals, both those pursuing vaccine strategies and those looking for oral remedies of their own for the virus.

Pills that fight the disease are less invasive than vaccines and are likely to face less resistance, as they can be taken at home. They may also be more effective against variants than the vaccine.

On Sept. 30, Bukwang Pharm announced that it will halt developing its Levovir capsule-type treatment candidate, which was in Phase 2 clinical trials. It failed to produce meaningful results in the clinical trials.

The announcement by Kenilworth, New Jersey’s MSD (known as Merck & Co. in the United States and Canada) about positive results in the testing of its molnupiravir oral treatment candidate is also a factor. On Oct. 1, MSD announced that molnupiravir, which is currently undergoing Phase 3 clinical trials, can cut the chances of dying or being hospitalized by half. It is currently waiting for an emergency use approval from the U.S. Food and Drug Administration.

New York’s Pfizer and Switzerland's Roche are also developing oral treatments, both currently in their last round of clinical trials.

The news is discouraging Koreans investing in domestic companies on the hope that the companies would lead in the race for an oral treatment.

Shares of Hyundai Bioscience, which is currently developing oral treatment CP-COV03, dropped 15.44 percent on Oct. 1. It plummeted 21 percent the next session.

The price of Kosdaq-listed CrystalGenomics declined 5.3 percent that day, and another 8.3 percent the next session. The Seongnam-based bio company is currently developing CG-CAM20, an oral treatment that is in Phase 2 clinical trials.

Daewoong Pharmaceutical is down almost 7 percent since the end of last month.


The company is currently developing Coviblock, an oral treatment candidate, using the "drug repositioning" strategy. The strategy means companies are exploring existing drugs that have been approved for other diseases in order to develop a treatment for Covid-19. The safety of those treatments has been verified to a certain degree, and these drugs are often permitted to skip Phase 1 clinical trials and can be exported to many countries quickly once they have been demonstrated to be effective.

Daewoong’s Coviblock was originally developed and sold as a treatment for pancreatitis and reflux esophagitis under the name Foistar.

"I have invested millions of won in biopharmaceutical companies, especially the oral treatment makers, with the hope that oral treatments could be game changers in the pandemic," said Lee Moon-hui, a 55-year-old resident of Seoul. "But they have all been falling in recent days. It doesn't seem like they will go up again since global companies are showing way quicker progress."

MSD’s positive news about its oral treatment also had a huge impact on local biopharmaceutical companies that are developing vaccines or injection-type treatments.

Chong Kun Dang’s share fell 8.4 percent on Oct. 5, despite the news that its Nafabeltan injection-type of treatment received the nod for Phase 3 clinical trials from the Ukraine.

Earlier in the year, the Korea Disease Control and Prevention Agency said it allocated 16.8 billion won of this year’s supplementary budget to purchase oral Covid-19 treatments for 18,000 people, and 19.4 billion won to buy enough for 20,000 people in next year’s budget. This means that the price of the oral treatment will likely be around 952,600 won per person.

It said it has been negotiating with a few global companies for oral treatment purchases, with MSD being the most probable one as of now.
A petition urging the government to "review its plan to buy MSD’s oral treatment" was posted on the Blue House website recently. The post argues that the "price is too expensive" and the country should not "turn domestic companies away."

“It is true that domestic companies are showing slower progress in developing Covid-19 vaccines and treatments than global companies,” said a source from a biopharmaceutical company. “However, the development by local companies must go on."