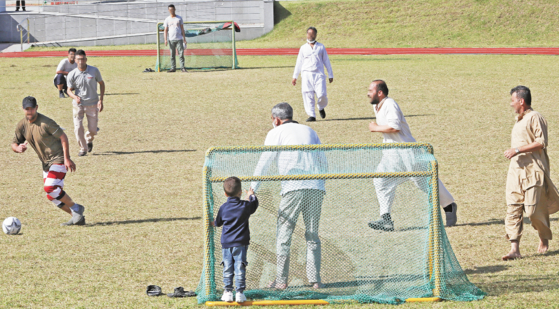 Afghans evacuated from Kabul to Seoul in late August play football together in field at a government facility in Jincheon County, North Chungcheong, on Wednesday. They will be staying at the facility through next February to participate in programs such as language classes and job search mentoring to help them adjust to life in Korea. [PARK SANG-MOON]


They were afraid for Kabul when the city fell.

But fear seemed to be far from their minds when the Afghans, adults and children alike, spoke of their coming weeks and months to be spent in their new homes in Korea.

“In Korea, there are no wars,” said a 15-year-old from Afghanistan speaking with the press at a government facility in Jincheon County, North Chungcheong, on Wednesday.

Born after 2001, when Afghanistan entered into war with the United States, the boy had never seen his country in peace.

“I am glad to be here with my friends, to practice sports and learn Korean,” he said. “I’d like to play football professionally one day.”

He was joined by two more teens who were flown in from Kabul in late August by the Korean government, after the capital fell to the Taliban forces. All three were still wearing their Taekwondo suits from their weekly class as they were speaking to the press. Their names were withheld from the press for personal security reasons.

“It’s nice to be able to practice Taekwondo without wearing a hijab — that I have that freedom to choose,” said a 13-year-old girl from Afghanistan. “I hope I can go to school here, find a job and be with the Korean people.”

The 391 Afghan citizens evacuated from Kabul in late August and early September are those who in recent years have worked with the Korean government — be it on development and reconstruction projects in rural areas, in joint medical operations or in the Korean embassy — and their relatives.

Of them, 156 are adults, 195 are children and 40 are babies, according to Korea’s Ministry of Justice.

“Our families are happy here, and we have hope for the future,” said an Afghan man in his 40s who had previously worked at the Afghan-Korea Vocational Training Institute located within the Bagram Air Base, formerly the largest U.S. military base in Afghanistan.

“We know that settling down in Korea is not easy for a person who had grown up in a different country — [in our case,] a developing country,” said another Afghan man, who had worked with Korea’s Provincial Reconstruction Team (PRT) in Charikar, the main town in northern Afghanistan's Parwan Province. “But with the support of the Korean government and the Ministry of Justice, [who] are providing us with good programs like mentoring for our jobs […] and cultural and language training, I think that all the members who came here will work hard to settle down properly.”

The Afghans will stay and undergo integration programs at the National Human Resources Development Institute in Jincheon through February next year, which includes Korean language classes, Taekwondo and sports activities, fire and other disaster response training and classes that share information on daily life knowledge for living in Korea, such as how to recycle and dispose of trash properly.

They have all been granted F-1 visas, which allows them to stay in Korea long-term, and should eventually be granted F-2 visas for their “special contributions” in working with the Korean government, according to the Ministry of Justice. The F-2 visa allows holders to stay in Korea long-term, be employed, and eventually apply for permanent residency. The ministry is working on revising the current immigration laws to make the transition from F-1 to F-2 visas possible for the evacuees.

“The Afghans who are taking my foreigner-reintegration program are very engaged in finding out about Korea’s economic policies, the average income, the jobs available and how much apartments cost,” said Yoon Yeon-han, director of the Multicultural Family Support Center of Cheonan, who is running a regular training program at the Jincheon facility. “After the next few months of training, I hope that they will be equipped with the right information to guide their job search.”

But in some cases, it seems, the Afghans may not need the additional training on all things Korean.

“Back in 2011, when Korean dramas were diversely popular among the university students in Kabul, [we watched] ‘Boys over flowers,’” said the former Afghan employee of the Korean embassy. “[We watched it to the point] that we would miss exams, because we were all-night awake watching the drama series.”

“We worked for long years with the Korean governments and institutions like the Korean hospitals, Korean PRT and the embassy, [with] the Korean colleagues,” said the former PRT member. “We were familiar with the background and cultural affairs between the two nations; for us, it is not a big challenge [to adapt to life in Korea]. We were already adapted in Afghanistan, it’s just a continuation.”

Before Kabul fell to the Taliban, the Korean government got in touch with their former colleagues in Afghanistan around July to see if they may be interested in an evacuation lift. They put together a list of people who had shown interest.

But the situation in Kabul unraveled quickly after the Taliban forces overtook the capital on Aug. 15. The Korean government pulled all Korean citizens including its ambassador out of the city within the next two days.

The diplomats were then dispatched back to the city by the end of the week to carry out the rescue operation of the Afghans, dubbed Miracle Operation by the Korean government.

The 390 Afghans (one additional Afghan was rescued separately, later) boarded a bus in Kabul headed to the airport on Aug. 24, only to be stopped by the Taliban outside one of the airport gates. They showed the Taliban forces their travel certificates issued by the Korean government, to no avail. They waited there for some 14 hours, unsure of what fate had in store.

“Even thinking back about that [time] is horrible,” said an Afghan who once worked at the Korean Embassy in Kabul. “Many of our friends could not pass through, and they were shooting guns […] we risked our lives to get through. And only three days after our departure, the explosion [near the Abbey gate of the airport] happened. It’s not easy to talk about these moments.”

Many of the special contributors from Afghanistan have family members still in the country.

“The current situation [in Afghanistan] is dire because the businesses are closed, there is shortage of cash in the banks,” said the former PRT member. “The Taliban is conducting house-to-house search for people who worked with the international community and their officials, and the overall situation is not very good.”

But home is still home, and the Afghans spoke of their hopes to one day return home again, if circumstances allow.

“As long as we live in Korea, we would like to learn something and become something important, that if we have the chance to return back to Afghanistan, we would be someone beneficial for the development of our country in the future,” said the former PRT worker.

“People like to remember their roots, wherever they [or their parents] were born,” said the former employee of the Korean embassy in Kabul. “We [would be] happy to see our children one day visit their homeland and visit their family members.”