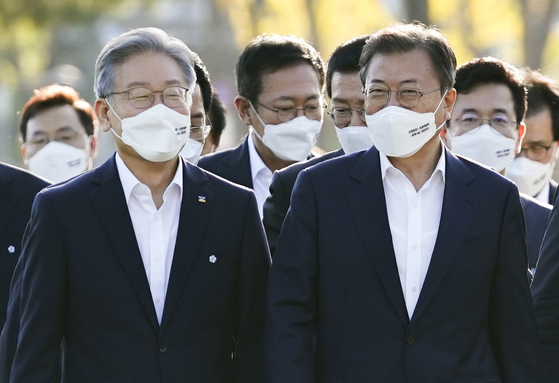 
President Moon Jae-in proposed a new national strategy for balanced regional development Thursday, stressing that it is urgent to disperse manpower and infrastructure concentrated in the metropolitan area.

“In order to break away from the unipolar system in the metropolitan area, we need to find a special strategy that is different from ones in the past,” said Moon in an event held in Sejong City, urging stronger cooperation between municipal and provincial governments.

Moon said that a “new model of ultra-wide cooperation” can help “reverse the trend of concentration in the metropolitan area and progress toward a more evenly-distributed, prosperous Korea.”

The meeting to announce the government’s report on a “balanced development and a mega-region cooperation support strategy” was attended by all 17 provincial and municipal leaders and members of Moon's Cabinet.

The cities of Busan and Ulsan and South Gyeongsang proposed a strategy to build a so-called mega-region last February, the first such model. The central government will help provide financial and legal support for such mega-regions. It plans on providing tax incentives for companies that invest in mega-regions.

Daegu and North Gyeongsang, Gwangju and South Jeolla and the Chungcheong area are other examples of possible mega-region cooperation.

More than half of the population lives in the Seoul metropolitan area, including Incheon and Gyeonggi, despite government efforts to decentralize the country.

The government also plans to build a transportation network “to establish a growth base where jobs, human resources and capital can flow in a virtuous circle," Moon said.

The government also plans to operate a mega-region university model to build up human resources.

Moon said that such regional cooperation will be led by the provincial and municipal governments, and that the central government will support them.

Moon also welcomed that lawmakers approved a bill last month to establish a regional branch of the National Assembly in Sejong City, another attempt at decentralization.

The event was attended by Prime Minister Kim Boo-kyum and other members of Moon’s cabinet including Education Minister Yoo Eun-hae and Minister of Interior and Safety Jeon Hae-cheol. 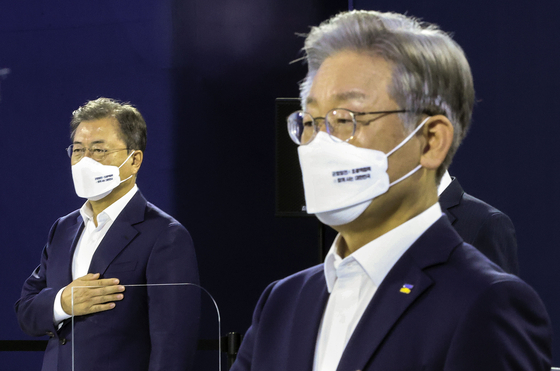 Gyeonggi Gov. Lee Jae-myung, who was nominated earlier this week as the ruling Democratic Party (DP) candidate for the presidential election next year, also attended the meeting.

Moon relayed his congratulations to Lee, and they briefly shook hands, said a Blue House official.

Moon and Lee did not hold any separate meeting on the sidelines of the event, however.

Gov. Lee has been embroiled in allegation of involvement in the Daejang-dong land development project when he was Seongnam mayor in 2015.

A Blue House official said, “As a presidential candidate of the ruling party, a meeting with the president is in the process of being coordinated,” without further specifying the date.