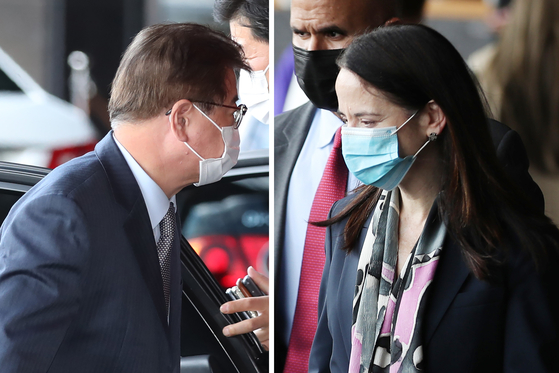 Suh Hoon, national security advisor of Korea, left, and Avril Haines, the U.S. director of national intelligence, in separate photos taken at the Shilla Hotel in Seoul on Monday. Haines is visiting Korea this week to meet with Korea's and Japan's intelligence officials to discuss North Korea and other top agendas of trilateral concern. [YONHAP]


Heads of intelligence of Korea, Japan and the United States were reported to meet in Seoul on Monday, just as their nuclear envoys gathered in Washington.

This is the first time in five months for the three to meet, after they last got together in Tokyo in May. The trilateral meeting was to be followed by another meeting between Park and Haines.


National Security Advisor Suh Hoon was also reported to have met with Haines on Monday.

“The gathering of the South Korean, U.S., and Japanese intelligence chiefs signals that there is an urgent agenda to discuss, and at this meeting, we plan to exchange a wide range of opinions on an approach to North Korea, including dialogue with North Korea, and on North Korea's nuclear program,” said an official of Korea’s Foreign Ministry on Monday. “We will also have time to listen to the opinions of the United States and Japan on the Korean government’s initiative to declare an end to the [1950-53 Korean] War.”

It’s been an agenda of the Moon Jae-in government to formally put an end to the war, an initiative the president repeated during his address to the United Nations General Assembly last month.

Noh Kyu-duk, South Korea’s top nuclear envoy, upon arrival in Washington on Saturday also declared ending the war as part of his delegation’s agenda. Noh was scheduled to meet with Sung Kim, U.S. nuclear envoy, on Monday, and with his Japanese counterpart Funakoshi Takehiro, director-general for Asian and Oceanian affairs of Japanese Foreign Ministry, on Tuesday.

“It is expected that there will be more full-fledged discussions at the working level on various measures, including the declaration of the war's end,” Noh told reporters at the Dulles airport on Saturday.

The issue was also brought up during the meeting between national security advisor Suh and his American counterpart Jake Sullivan in Washington last week. 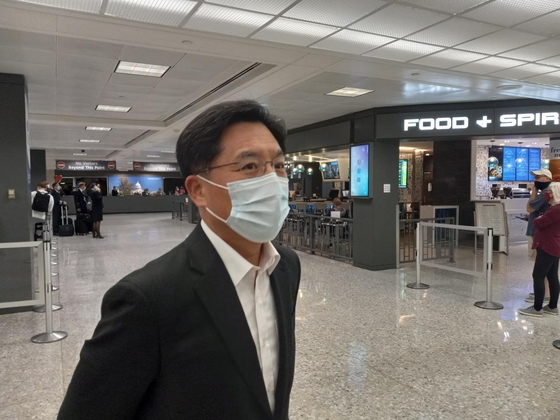 Korea's nuclear envoy Noh Kyu-duk at the Dulles airport on Saturday. Noh is scheduled for talks with his counterparts Sung Kim, U.S. nuclear envoy, and Funakoshi Takehiro, director-general for Asian and Oceanian affairs of Japanese Foreign Ministry, this week. [YONHAP]


The U.S. government has not been vocal on whether it plans to support the Korean government’s initiative to declare the end of the war, other than a brief statement from John Kirby, the Pentagon spokesman, on Sept. 23, when he said the U.S. government is “open to discussing” the possibility of formally ending the Korean War.

The Joe Biden administration since its North Korea policy review in April has repeatedly communicated to Pyongyang that it is open for talks on a number of top agendas between the two, including complete denuclearization of the Korean Peninsula, but has adhered to its principles of enforcing strict sanctions and not offering any incentives for the sole sake of talks with Pyongyang. The administration in June extended the sanctions on the regime, in place since 2008, for another year.

In the meeting between Noh and Kim in Washington on Monday, the two were expected to discuss possible humanitarian aid into North Korea, which includes aid in the fields of health care, Covid-19 prevention, drinking water and hygiene.

Seoul and Washington have repeatedly signaled their intention to provide humanitarian aid to Pyongyang, a call that it has not officially responded to.