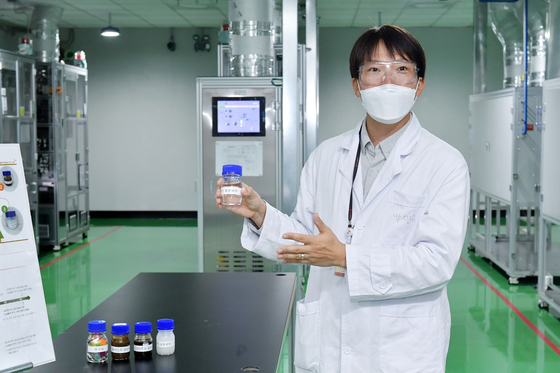 
DAEJEON — Over a dozen large machines were busy removing chlorine from pyrolysis oil Monday morning in an environmental science research center in Daejeon, which SK Geo Centric believes could be a better way to recycle plastic waste.

Pyrolysis oil is created when plastic waste is heated above 400 degree celsius. It's not capable of being reused because of impurities like chlorine and nitrogen, which could cause air pollution or corrosion of equipment.

SK Geo Centric is developing a way to remove the impurities and make a cleaner oil that can be recycled into new forms of plastic  — which the company calls chemical recycling, or post-processing technology.

SK Geo Centric is using hydrogen to treat pyrolysis oil, just one of its ambitious efforts to make the earth greener. The wholly owned subsidiary of SK Innovation rebranded itself in August — its previous name was SK Global Chemical — and pledged to invest 5 trillion won ($4.2 billion) through 2025 to expand its plastic recycling facilities and develop technologies for manufacturing eco-friendly materials and recycling plastic waste.

"Pyrolysis oil contains various types of impurities like 1,000 parts per million [ppm] of nitrogen, 500 ppm of chlorine and 50 ppm of sulfur,"  said Lee Min-gyu, leader of the research center’s plastic chemical recycle team, who led Monday’s press tour. "These should be reduced to the 1 ppm-level in order to become raw material that can be reused in oil refining and petrochemical factories.”

SK Geo Centric and the SK Innovation research center have been working together to develop the technology, and they started supplying a new, promising raw material to SK Innovation’s Ulsan plant at the end of September. 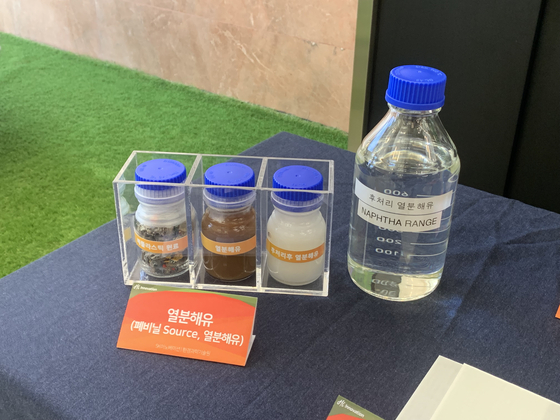 
Earlier the year, SK Geo Centric joined forces with Brightmark, a San Francisco-based company specializing in pyrolysis, to cooperate in building a pyrolysis plant. The two companies set a goal of building a factory in Ulsan by 2024, and a demo plant by first half of 2022.

If constructed, around 200,000 tons of plastic waste will be turned to 1.08 million barrels of pyrolysis oil per year, according to Ham Hyeong-taek, head of the eco-friendly product solution center of SK Geo Centric.

“The purpose of chemical recycling is to decompose plastic waste that cannot be recycled in conventional ways and transform them into new resources,” Ham said. “Using the technology, 1 million tons of plastic vinyl can be converted to 5.4 million barrels of oil.”

The Monday press tour continued to a pyrolysis plant in Incheon that is operated by Eco Creation, which is 25 percent owned by SK Geo Centric.

Eco Creation converts plastic waste such as packaging film, plastic boxes, instant noodle cups, milk cartons, and bathtubs to oil. The company’s plant can treat about 10 tons of plastic waste every day. The plant takes some 14 hours to complete the process.

The extracted oil is delivered to SK Geo Centric so that the company can do the chemical recycling process, aiming at a raw material that can be reused as petrochemical products or in making completely new plastics. 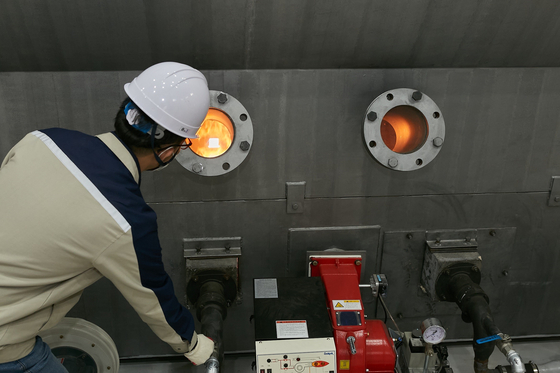 
Other local companies have the same goal, but SK Geo Centric teamed up with Eco Creation because it has the “ability to extract relatively cleaner oil compared to other companies, which helps it easier for us to remove impurities.”

Eco Creation’s pyrolysis technology received a New Excellent Technology certificate from the Ministry of Environment. It is rare for a manufacturing company to acquire the certificate, according to the Incheon-based company.

The plant, which is currently under a pilot run, aims to start full operations in November.

“By extracting high-purity oil and supplying it to SK Geo Centric, we believe the two companies can create synergy effects in terms of eco-friendly and ESG [environmental, social and governance] management,” said Kim Ji-yeon, CEO of Eco Creation. “We will contribute to the country’s goal of carbon neutrality by maintaining close cooperation with SK Geo Centric, and lead the way to build a virtuous circle of plastic waste.”