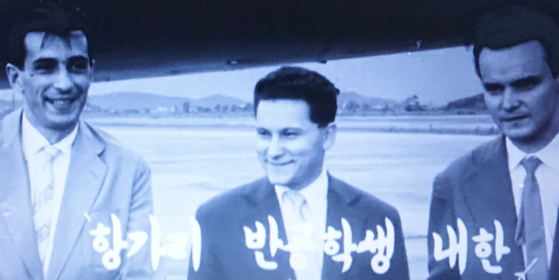 Hungarian anti-communist students at Youido International Airport in Seoul in July 1957. Karoly Derecskey is on the left. (Capture from the archive newsreel Daehan News.)


On Oct. 23, 1956, a huge revolution, a fight for freedom, broke out in Hungary against the Soviet-style communism. University students and workers in Budapest pulled down the gigantic statue of Soviet leader Joseph Stalin, the hated symbol of the dictatorship.

However, after thirteen days, the revolution was repressed by the Soviet tanks. Few realize that this Hungarian fight for freedom had created a huge solidarity movement in South Korea.

Only three years after the armistice of the bloody Korean War, many South Koreans welcomed the news of the revolution which had broken out far away in Central Europe.

The government of President Syngman Rhee hoped that the uprisings in the Soviet empire would have an impact on North Korea, and its population would overthrow the dictatorship of Kim Il-sung.

During the first days of the Hungarian revolution, the South Korean press described the developments in Budapest as a rebellion.

However, a few days later, the daily Chosun Ilbo wrote that the situation in Budapest was at the stage of a "civil war" and emphasized that the developments were being led by thousands of students. In late October, the Chosun Ilbo defined the Hungarian revolution as "anti-communist people's struggle."

Korean students defend Hungary
According to contemporary South Korean press reports, the first big event in Seoul inspired by the Hungarian revolution occurred on Oct. 29, 1956, in front of the City Hall.

The event was instigated by the anti-communist Munchong organization under the slogan of "North Korean brothers, rise up!"

A few days later the daily Chosun Ilbo wrote that the South Korean army had created a contingency plan in case of the hoped-for North Korean uprising.

However, the Central European events didn't spark a revolution in North Korea.

On the first week of November 1956, the Hungarian revolution was repressed and the news created a huge echo in South Korea.

They wanted to travel to Hungary to fight against communism and even asked the Minister of National Defense Kim Yong-woo to provide them with weapons.

However, the minister told the students that he fully understood their rage, but advised them to continue their studies instead to deepen their knowledge in international relations in order to become successful diplomats.

In the autumn of 1956, a solidarity speech about the Hungarian revolution was also given by Ban Ki-moon, former UN secretary general who was a middle school student at that time. 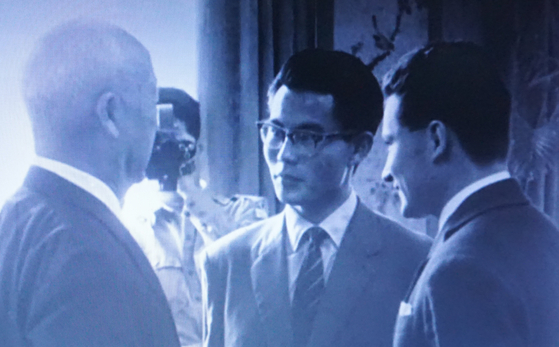 Hungarian students at the Kyongmudae residence. President Syngman Rhee is on the left, and the former North Korean student, Zang Tae, is in the middle. He served as the Korean-Hungarian interpreter. (Capture from the archive newsreel Daehan News.)

According to another source, President Rhee donated a much bigger sum of $10.000 via the International Red Cross to aid Hungarians in the Austrian refugee camps.

In July 1957, the South Korean government welcomed three Hungarian emigrant students in Seoul. The young men represented the Union of Free Hungarian Students which was established while in exile.

Their goal was to inform people all around the world how the Hungarian revolution was repressed. After visiting Indonesia, the three visited Japan where the South Korean consul-general, Choi Gyu-hah, who later became the President of Korea, issued visas for them to be able to enter Seoul.

The Hungarians arrived at the Youido International Airport on a Taiwanese CAT airlines plane. Karoly Derecskey (1926-2001), one of the three emigrants, wrote in his memoirs about the visit.

The first Korean who greeted them at the airport in Seoul was a former North Korean student who had been sent to Hungary after the Korean War. The young North Korean had studied there, but he escaped from the Central European country after the defeat of the revolution.


Anti-communists in Seoul
The former North Korean student was invited to South Korea by President Syngman Rhee. He had appeared in the South Korean newsreel, Daehan News, when he arrived in Seoul in February 1957.

The Hungarians were transferred from the airport to the Bando (Peninsula) Hotel in the city downtown. Their car was escorted by police jeeps and motorbikes. The Bando Hotel was built in 1938 under the Japanese name of Hanto Hotel. It had been the tallest building in South Korea for decades.

After the national liberation in 1945, the offices of the building were used by the U.S. Army headquarters. In 1953, the Bando Hotel was reconstructed by the South Korean government, and it became a center for political and cultural affairs.

Later, after several reconstructions and business transactions, the building became the Lotte Hotel in the downtown, as seen today. The memory of the former Bando Hotel can be found from the "Peninsula Lounge" on the first floor of the hotel.

The three Hungarian young men held a press conference at the hotel and then attended an anti-communist gala dinner. The representatives of the "white" Russian emigrants also participated at the dinner.

At that time, there were still Russian emigrants in Seoul. They had their own radio station which broadcast news in Russian to the Far Eastern region of the Soviet Union.

Back to the young Hungarians, they were under strict surveillance of the local authorities, even in the hotel. When one of them left his room in the middle of the night to drink a glass of whiskey at the local bar, he was followed by a guard in civilian dress.

The young Hungarians asked the reason of the continuous tailing, and the authorities told them that they could be the target of a North Korean assailant.


Meeting with Syngman Rhee
The aforementioned young emigrant, Karoly Derecskey, wrote in his memoirs that the mood in Seoul was not good: The traces of destruction by war could still be seen, and the local people looked sad and careworn.

However, the Hungarian students had an opportunity to observe the other side of the city as they were invited to the presidential residence, which was called Kyongmudae at that time. (It was renamed to Cheong-wadae, or the Blue House, three years later.)

According to the Hungarian students, the neighborhood was in good condition and there was a big gap with the whole capital. In the garden of the Kyongmudae, residence guards with machine guns were standing every 50 meters (55 yards), and six armored vehicles were parked in front of the main building which was covered in camouflage.

President Rhee received the three Hungarians in the company of Nelson A. Rockefeller, the former foreign policy adviser of President Eisenhower, and Franziska Donner, the Austrian-born South Korean first lady.

When one of the Hungarian emigrants said that later he would like to study in Austria, the first lady was very happy as the man mentioned her native place.

However, Karoly Derecskey had mixed feelings on President Rhee, who was very combative. The elderly politician said that it was time for the whole world to fight against communism, but the young Hungarian emigrant found his words dangerous and impracticable.

However, Derecskey acknowledged that President Rhee played a great role in saving the South Korean sovereignty during the Korean War. 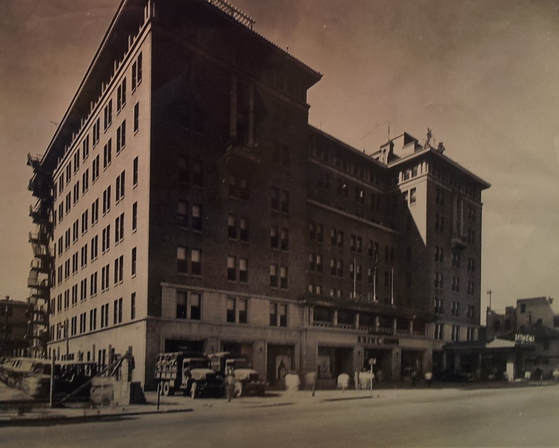 The Bando (Peninsula) Hotel in Seoul where the Hungarian students were accommodated in 1957. The building became part of the current Lotte Hotel. [Hungarian Embassy]

Daehan News commented on the meeting with similar diction and mentioned that the Hungarian emigrants greeted "the great leader of the anti-communist front of Asia."

Ovation at the university
The three Hungarian emigrants asked their hosts to give them an opportunity to meet with South Korean university students, but their visit to a leading university had some unexpected results.

During the meeting with the young South Koreans, Karoly Derecskey and his fellows understood the considerable amount of tension in South Korea between the government of President Syngman Rhee and the younger generations.

According to Derecskey, the university was filled with some 8 to 10 thousand students who were applauding rhythmically.

The atmosphere was mechanical and military. However, when Derecskey started his lecture about the glorious days of the Hungarian revolution and how the young Hungarians destroyed the dictatorship, the atmosphere changed.

The South Korean university students listened to his interpreted words with great interest in complete silence, and after the lecture finished, the audience gave an ovation.

They exclaimed, shouted and came to the podium. Everybody wanted to shake their hands with and talk to him.

After a few minutes of this ovation, the guards came back with two jeeps and pulled the Hungarians into the cars. Derecskey wrote that his car door suddenly opened and a female student gave him her small notebook and a pencil.

She may have wanted to have his autograph or his address. Years later, Derecskey wrote that he still keeps that relic given to him by the brave girl who was then pulled out from the car by the guards immediately.

We can see that the speech, given by the young Hungarian emigrant, gave a very different impact on the Korean students than what was thought by the government of President Rhee.

And we have to emphasize that three years later, in the spring of 1960, a revolution led by South Korean students ended the almost 12-year-long rule of President Rhee.

By Mózes Csoma,
Ambassador of Hungary to Korea