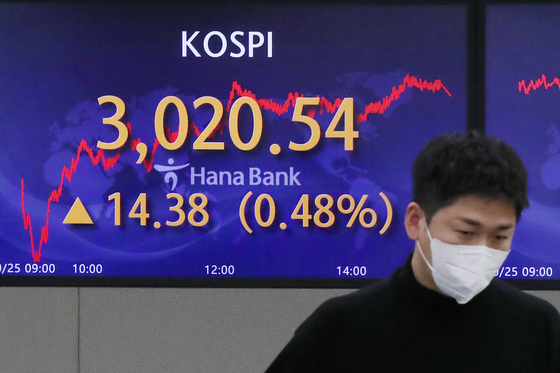 
The Kospi snapped its three-day losing streak Monday amid expectations of strong quarterly earnings. The won rose sharply against the dollar.

Trading volume was moderate at about 782 million shares worth some 10.3 trillion won ($881 billion), with gainers outnumbering losers 552 to 286.

Stocks got off to a weak start, largely in the wake of the U.S. Federal Reserve's signal that the present high-price pressure may not subside soon.

The Kospi pared its earlier losses on hopes that third-quarter corporate earnings would be better than expected.

"Stocks may take on an upward momentum depending on how well the season turns out," said Kiwoom Securities analyst Han Ji-young.

The local currency closed at 1,168.4 won against the dollar, down 8.7 won from the previous session's close.