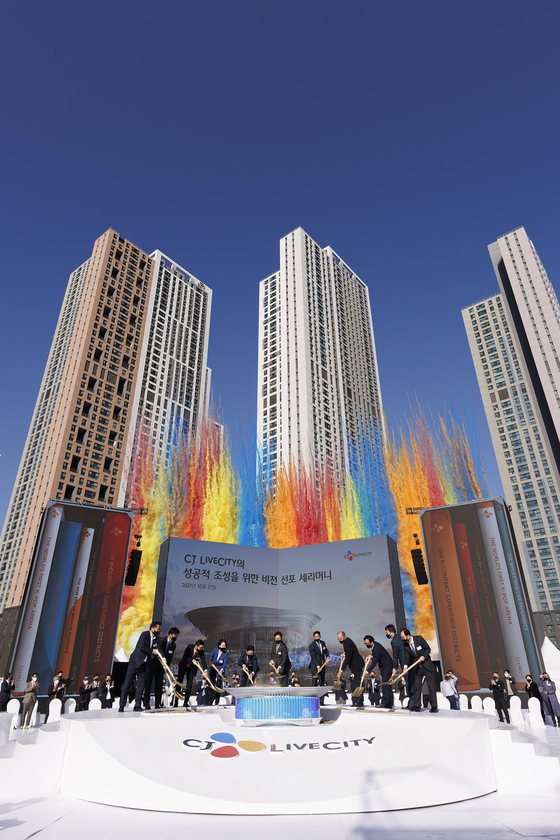 The CJ LiveCity Arena will open in 2024 with 20,000 indoor seats, and room for more than 40,000 people outside to enjoy concerts, according to the company behind it, CJ LiveCity.

The arena is part of a new business complex for the CJ Group, which is also called CJ LiveCity. The 326,400 square meter (80 acres) complex will also have a hotel, offices for content-creating companies, and attractions for fans of Korean dramas and movies.

CJ LiveCity was established in 2015 to build the complex. CJ LiveCity is 90 percent owned by CJ ENM and the remaining 10 percent is owned by minority shareholders.

The CJ LiveCity Arena will have state-of-the-art concert equipment capable of showing off new and hip technologies like the metaverse and artificial reality.

“A solid fandom for K-pop artists has been formed worldwide,” said CJ LiveCity in a statement. “But there isn’t a venue that is specifically designed to hold [major] music concerts in Korea. To embrace more than 10,000 audiences, [K-pop groups] had to use a sports facility” like the Olympic Stadium in Jamsil, southern Seoul.

The company added that it was difficult for Korea to attract global superstars to play without such an arena.

At a groundbreaking ceremony Wednesday, Lee Jae-jun, the mayor of Goyang, said Korean pop culture content should be used for more than just raising Korea's profile and should be generating economic effects.

Kang Ho-sung, CJ ENM CEO, said the company will strengthen its content creation ability and make active investments to expand overseas business. Kang added that CJ LiveCity will be “at the core” of those plans.

A total of 1.8 trillion won ($1.5 billion) is expected to be spent to build the complex.

Global entertainment company Anschutz Entertainment Group (AEG) is one of the investors in CJ LiveCity. How much the company invests is still under negotiation, said CJ LiveCity.

CJ LiveCity said it expects 20 million visitors annually to the arena, who will generate an economic effect worth 1.6 trillion won per year. Around 280,000 jobs will be created, it added.

CJ Group was selected to build the cultural facility in 2015. A groundbreaking ceremony for what was then called “K-Culture Valley,” a theme park, was held in May 2016.

The project was delayed due to licensing issues and was changed to a business complex focused on Korean content. Gyeonggi Province gave approval to CJ to build the renamed CJ LiveCity last year.