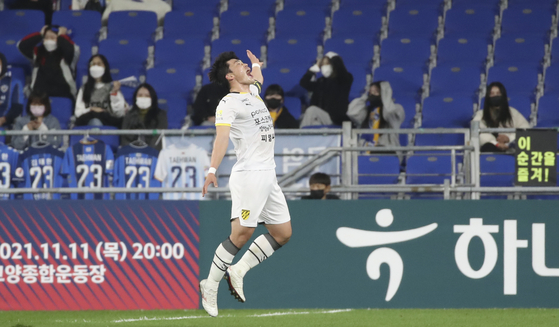 Lee Jong-ho celebrates after scoring the opening goal for Jeonnam Dragons in an FA Cup semifinal match against Ulsan Hyundai at Ulsan Munsu Football Stadium in Ulsan on Wednesday. [NEWS1]


Ulsan Hyundai suffered a shocking 2-1 loss to K League 2 side Jeonnam Dragons in the semifinals of the 2021 FA Cup on Wednesday, ending the K League leader's bid to win the double this season.

Daegu FC beat Gangwon FC 1-0 in the other semifinal, setting up a Jeonnam-Daegu final to begin on Nov. 24.

Jeonnam's Lee Jong-ho gave the underdogs an early lead with a goal in the 22nd minute, with Jang Soon-hyeok adding one more shortly after the break. Ulsan were able to get one back with a Valeri Qazaishvili penalty in the 80th minute, but the home side were outgunned across all 90 minutes at Munsu Football Stadium in Ulsan.

Lee headed in the first goal off a corner, exposing Ulsan's weakness to set pieces that has plagued the side throughout the second half of the season.

Qazaishvili's penalty got Ulsan back into the game, but Jeonnam's snappy offense kept the home team on the back foot throughout the game. The closest Ulsan came was a Kim Ji-hyun effort at the start of the second half, but the goal was ruled offside. Ulsan kept up the offensive in the dying few minutes, but Jeonnam's defense and goalkeeper Park Jun-huk kept the door firmly shut to ensure the win.

Jeonnam were the only lower-ranked team to reach the semifinals of the FA Cup. The South Jeolla club has had a fairly average season, with 13 wins, 13 draws and nine losses this season for fourth place. In the FA Cup, however, Jeonnam are now chasing history.

Jeonnam have won the FA Cup three times, in 1997, 2006 and 2007. On all three occasions, the club entered the tournament from the K League 1, where the Dragons played until 2018. No K League 2 side has ever won the FA Cup, although K3 League club Daejeon Korail FC did reach the final in 2019.

For Ulsan, Wednesday's loss is the latest blow to what at one point looked like it could have been a record season for the club.

Just two weeks ago, Ulsan were chasing a historic triple, reaching the quarterfinals in the AFC Champions League, the semifinals in the FA Cup and leading the K League without a serious challenger for months.

The Champions League bid fell apart last week when the Pohang Steelers beat Ulsan in the quarterfinals, ending the triple bid. Jeonnam have now ruined the double bid and even the league title is now under threat. Ulsan lost to Seongnam over the weekend, allowing Jeonbuk Hyundai Motors to draw level with them at the top of the table.

"I want to say sorry to the fans," Ulsan manager Hong Myung-bo said after the game. "I don't think our players are losing confidence. I blame myself for not meeting my own expectations."

For Daegu, winning the FA Cup is the easiest route to next year's Champions League. Daegu are currently third in the K League 1, but with a significant gap separating them from Ulsan and Jeonbuk, the FA Cup title is the only certain route to the continental tournament.