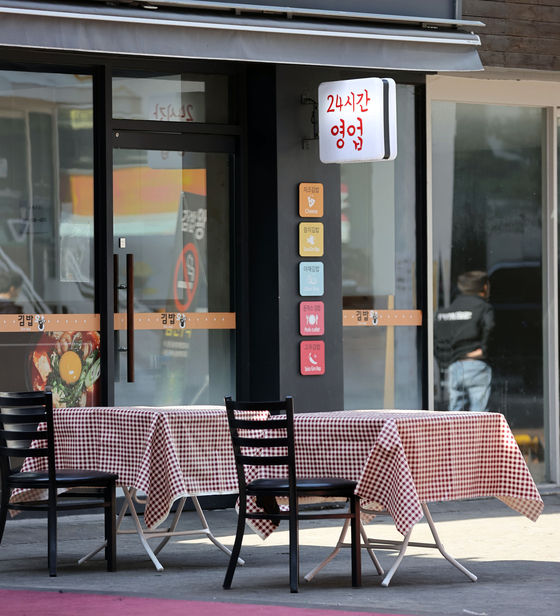 
Business owners are revving up for Korea's return to normal, calling up workers they had let go and welcoming new customers.

Starting Nov. 1, restaurants, cafes and bars will be allowed to stay open 24 hours a day as Korea announced it will relax social distancing measures. Night clubs and bars that allow dancing will be allowed to open until midnight, and small businesses are busy getting ready for their re-opening.

“I’m so happy that I can re-open my business,” said Kim Ki-jun, a 72-year-old owner of a nightclub in Sangbong-dong, eastern Seoul. “I’ve participated in rallies to protest against the government’s social distancing regulations, and now, I’m just thankful about everything.”

Kim said he called back employees he had to temporarily lay off.

“The employees had to finance themselves by working as day laborers, chauffeurs and delivery riders,” said Kim. “When we re-open, we’ll be extra cautious about disinfecting and cleaning the venue and keeping entry logs.”

Restaurants that used to stay open past midnight are also welcoming the change.

Hong In-sook, a 63-year-old who runs a sundaeguk (blood sausage soup) restaurant in Mapo District, western Seoul, immediately uploaded a job ad for night-shift part-time workers when the government announced the easing of operating hour restrictions. The venue used to be open 24-hours a day before the pandemic, but had to close early for the past year. She even renovated the restaurant in preparation for a possible increase in customers.

“The streets were almost empty just two months ago, but I’ve been getting more customers this month as the vaccination rate rose,” said Hong. “The customers used to eat fast and leave quickly, but I’m even getting people coming in to eat in groups.”

Although many are rejoicing, some fear eased social distancing measures could lead to more Covid-19 cases and the reintroduction of strict rules.

“I’m relieved that regulations will be eased, but I’m nervous that they might be imposed again if the number of infections spike,” said a noraebang (singing room) owner in Jongnang District, eastern Seoul. “The economy isn’t good due to the pandemic, and I’m worried if business will be successful as it used to be even with eased restrictions.”

Travel companies are also expecting brighter futures. Hana Tour had 70 percent of its 1,200 employees on both paid and unpaid leave since April last year, but called back 1,100 to return to work in early October. Those not returning to work are doing so for personal reasons, like maternity leave, according to the company.

“There will be more demand for travel when Thailand and Singapore are added to the list of countries that don’t require travelers to quarantine,” said Cho Il-sang, the head of the Hana Tour’s strategic planning division. “We’re extremely busy preparing new travel packages.”

A total of 120 Saipan vacation packages were booked for use by the end of the year, and another 1,000 for Guam were sold on Interpark Tour.

“We received 400 vacation reservations over the last two weeks,” said Shin Yong-suk, head of the sales planning team at Interpark Tour. “We estimate demand for Europe travel packages to be of some 5,000 people.”

Hotels are also benefiting from the change. Hotels could only book two-thirds of their rooms until now, but will be allowed to accept customers in all their rooms starting Nov. 1.

“Accommodation rates rose 15 percent in October compared to September,” said a spokesperson for Lotte Hotel. “If we can book all our rooms, the situation is expected to improve.”

The spokesperson said reservations at Lotte Hotel’s restaurants until end of year have recovered to 90 percent of pre-pandemic levels. The situation is similar at Shilla Hotel.

“We’re getting many booking requests for year-end gatherings by companies, schools and institutions,” said a spokesperson for Shilla Hotel. “The number of weddings is also increasing both in the weekends and weekdays.”