Korea Sale Festa to do its bit to revive the economy

Korea Sale Festa to do its bit to revive the economy 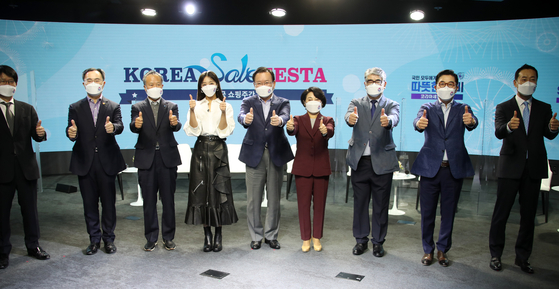 Prime Minister Kim Boo-kyum, fifth from left, and officials pose at a ceremony Sunday to celebrate the Korea Sale Festa that will run from Nov.1 through Nov. 15. The shopping event is supposed to be the Korean equivalent of Black Friday. [YONHAP]


The government is hoping to give a booster shot to the country’s economy with discount vouchers and a discount promotion that begins Monday.

Regional governments and businesses are holding the Korea Sale Festa, the Korean equivalent of Black Friday, for 15 days starting Monday. Up to 80 percent discounts on products will be offered, according to participating department stores, convenience stores and e-commerce sites.

Over 1,800 companies and 17 regional governments are taking part in the nationwide shopping event, which marks its sixth year. It is the first time the number of participating companies surpassed 1,800.

The Ministry of Oceans and Fisheries announced Sunday that it is partnering with eight discount supermarket chains including Emart and Homeplus and 5 online shopping malls including Coupang and 11st to offer up to 30 percent discounts on six popular marine products including mackerel, squid and dried anchovies during the Korea Sale Festa period. Partnering retailers could offer additional discounts on the products.

Online shopping platform Lotte On will team up with Lotte’s retail affiliates including Lotte Department Store and Lotte Himart to offer up to 80 percent discounts on products.

Convenience store chain Emart24 said Sunday it will be giving three extra masks per purchase of a mask for a week from Monday as part of its promotion. It will also be giving out cup noodles and bottled water to people who buy certain lunch boxes.

The government will resume its distribution of discount coupons that can be used both online and offline for payments in nine different categories including eating out, watching movies and cultural events, and domestic travel from Monday.

The coupons were first distributed by the government in August 2020 but were eventually suspended over public health concerns. Only some coupons for purchases made without face-to-face interactions were resumed. Discount coupons for food delivery were resumed in September.

A restaurant coupon that offers 10,000 won cashback after three times eating out in restaurants will also be offered. The coupon is offered on the fourth time eating out. Over 20,000 won needs to be spent at each meal to get the cashback.

Movie tickets can be 6,000 won cheaper on online reservation and tickets for sporting events about 50 percent cheaper under the government’s coupon scheme.

The Ministry of Economy and Finance said it will create an environment where the coupons can be used safely.

Boosting private consumption is considered necessary for the economy to maintain growth through the end of the year.

In the third quarter, economic growth slowed despite robust exports mainly due to weak private consumption, according to the Bank of Korea last week. Gross domestic product (GDP) in the third quarter increased by 0.3 percent on quarter, lower than an expected 0.46 percent and much lower than 0.8 percent on-quarter growth posted in the second quarter.

Compared to a year earlier, the country did achieve 4 percent growth in the third quarter, but that was largely due to a low base effect from last year. Growth also slowed compared to the second quarter, when on-year GDP growth was 6 percent.

Calm before the Festa