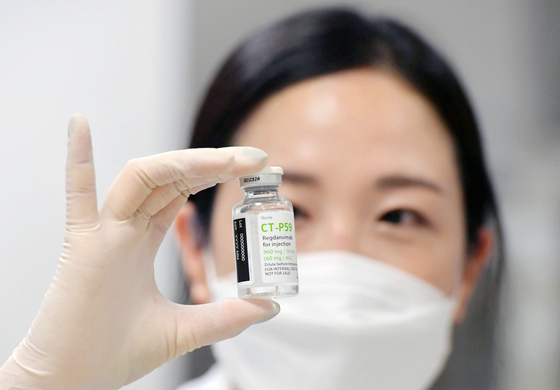 
In the Korean contest for Covid cures, the main event is Regkirona versus molnupiravir.

The former is Celltrion's answer to the virus, a domestic effort that is said to be relatively cheap and highly effective. The latter is the pill from Kenilworth, New Jersey-based MSD (known as Merck in the United States). It is imported, expensive, probably less effective and, according to at least one academic, may be dangerous.

William Haseltine, a former professor at Harvard Medical School and the Harvard School of Public Health, also expressed misgivings about the Merck treatment in a Forbes opinion piece published earlier this month.

Molnupiravir is of great interest to many because of its ease of use. It can be taken at home in pill form. Regkirona is administered intravenously over a 60-minute period. The Merck pill is so easy that it's possible that some people are forgoing the vaccine because they know there's a fix if they do get infected.

The Korean government has ordered 200,000 courses and is currently in talks to buy more.

Critics argue that the government's decision was hasty, especially when the safety and efficacy of molnupiravir have not been confirmed. They remain skeptical about the pill, saying that Korea has no reason to use it when the country already has a safer and more efficient treatment.

The Ford versus Ferrari war breaking out over the two treatments comes as Korea tries to regain the initiative in the battle against Covid. After early wins in the making, use and export of tests, the country has stumbled and fallen behind. It is struggling to produce a vaccine, and was slow in placing vaccine orders because it thought it could make its own. The emergence of Merck's miracle pill, which promises to be a true game changer, only makes matters worse, eclipsing in an instant almost all the work done so far in Korea.

Despite great hopes about the country's pharmaceutical companies taking the lead as a result of Covid, they have been left withlittle more than fill-and-finish contracts and other low-value-added work for companies that enjoyed remarkable success due to their fast development of vaccines. Many domestic efforts have just been abandoned, and the government is left crowing about K-quarantine as pharmaceutical majors globally rack up record earnings largely as a result of their Covid efforts.

Efficacy, safety and possible side effects


On Oct 1, MSD announced interim results of molnupiravir trials, saying that the drug can cut the chances of dying or being hospitalized by half. The company is currently waiting for an Emergency Use Authorization (EUA) from the U.S. Food and Drug Administration (FDA).

Britain approved the use of the drug, which was originally developed by Emery University in Atlanta to treat the flu, on Nov. 4. 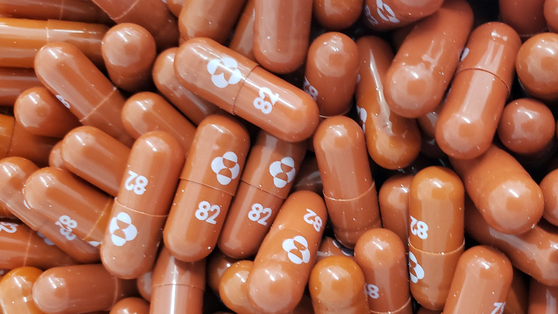 Molnupiravir, an oral antiviral Covid-19 treatment that is under development by MSD, which is known as Merck & Co. in the United States and Canada. [AFP/YONHAP]


Regkirona may be the better drug, according to local analysis of early test results.

It reduces the progression rate of the disease by 70 percent, according to the results of Phase 3 clinical trials. For high-risk patients over 50 years of age or those with underlying conditions, the progression rate dropped by 72 percent. Animal testing of Regkirona has produced meaningful results demonstrating its effectiveness against the highly contagious Delta variant.

The Ministry of Food and Drug Safety approved Regkirona in September. Brazil and Indonesia have issued EUAs for it, and Canada, Malaysia, Saudi Arabia, India, the EU and Mexico are considering similar authorizations.

The target for molnupiravir and Regkirona are the same, patients 18 or above who are highly likely to become seriously ill.

"Why buy a treatment from a foreign country when Korea already has a safer and more efficient treatment?" asks Seol.

"The genotoxicity may later cause serious problems," he continues. "Unlike most common side effects, like fever and headaches, it takes longer for patients to show these kinds of serious symptoms, so it would not be mentioned in the results of MSD's studies."

"The situation in United States is totally different with Korea. The health insurance program there is way poorer than in Korea. Korea should not bring in this risky drug just because United States wants to use it," he continued.

Terms of the MSD study raised eyebrows. They said a "female participant is eligible to participate if she is not pregnant or breastfeeding" and for males, they can only participate when they agree to be "abstinent from heterosexual intercourse during the intervention period and for at least four days after the last dose of study intervention."

"It's worth noting that people involved in the trials were instructed to abstain from heterosexual sex or use contraception," Simon Clarke, associate professor in cellular microbiology at the University of Reading, told the Science Media Centre.

"This news is positive, but we must not be carried away," he said, referring to the interim results of the molnupiravir study.

"Although we can't clearly reveal the exact price of Regkirona, it is cheaper than molnupiravir," said a spokesperson for Celltrion. "Oral treatments are expensive, and we don't know when we could actually take them. The number of infections is on the rise in Korea, and Regkirona is actually being used to treat them."

The price of Regkirona is around 400,000 won per person, which is half of that of MSD's oral treatment, according to industry sources. Celltrion offers the treatment to domestic medical institutions at cost, the company said. A total of 16,862 patients at 114 hospitals in Korea received the treatment as of Sept. 30.

"It is true that many people remain doubtful about the necessary of the injection-type of treatment after the MSD's announcement about molnupiravir," said Lee Myoung-sun, a researcher at Shinyoung Securities. "But MSD disclosed relatively small data sets, and they didn't reveal any details about safety and efficacy."

"There is no reasonable evidence to undervalue Regkirona at this point."


The Korean government says the country is just trying to offer patients one more option for treatment.

"With the 'With Corona' strategy, treatments that can be used at home will play a key role in treating patients and halting further spread of the virus, as Regkirona can only be injected at hospitals," an official from the Korea Disease Control and Prevention Agency told Korea JoongAng Daily. "The existence of an oral treatment means we can offer patients one more option to treat the coronavirus. Introduction of molnupiravir doesn't mean the country will exclude injection-type of treatments like Regkirona."

"We are trying to utilize both options, oral treatments and injection-type treatments, and Regkirona is already being used in many hospitals around the country."

Daewoong Pharmaceutical was about to conclude discussions with the Ministry of Food and Drug Safety and decide whether it will start Phase 3 clinical trials of its Coviblock oral treatment candidate by the end of October. But the talks have slowed, not a good sign for the candidate to start the next round of trials.

Shin Poong Pharmaceutical's Pyramax oral treatment candidate is in Phase 3 clinical trials. It failed to produce results confirming efficacy in Phase 2 trials, but was approved for Phase 3 trials by the ministry. Shin Poong increased the number of participants in the Phase 3 clinical trial by 12-fold, from 113 to about 1,420, in order to prove efficacy.

Bukwang Pharm, GC Pharma, and IL-Yang Pharmaceutical announced that they will halt the development of their treatments.