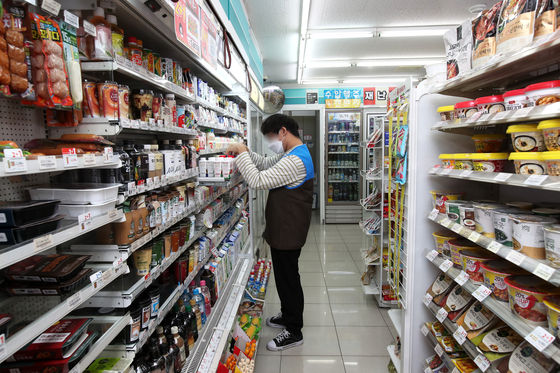 Mr. Park is a basic livelihood security recipient in his 20s and works at a convenience store in Gangseo District, western Seoul. [JANG JIN-YOUNG]


More people in their 20s and 30s are taking Korea's basic welfare payment, which in the past was the domain of the elderly poor.

Mr. Park, 22, is one such recipient. He fell into the welfare system when he was young and his family fell into poverty. He wants to get out by getting a decent paying job.

But that hasn't happened.

Park started getting national basic livelihood security, as it's called, in December 2019, after his mother got in an accident and lost her ability to earn a living. He was a senior in high school.

Park became a “conditional” welfare recipient, someone between the ages of 18 and 64 who has the ability to work and must get some kind of a job to support himself.

He got a job at a convenience store at an apartment complex in Gangseo District, western Seoul. operated by the Gangseo District Self-Help Center, as a part of its program to help basic livelihood recipients find jobs.

But it doesn't pay enough for Park to get off welfare.

He got an internship at a design company in February 2020, which he did while continuing to work at the convenience store. But the internship didn't pay him what it promised, and he didn’t get along with a senior colleague. He quit after six months.

Between January and August of this year, Park applied for around 30 jobs but didn't get any. He gave up.

“There is no way to find a job, and it's frustrating," says Park. "I hate everything. I envy my friends when they complain about work.”

Park earns 1.3 million won a month at the convenience store.

Park is just one of the many members of Generation MZ who are being forced to go on welfare due to the difficulty of finding jobs.

Recipients of basic livelihood security increased by 37.6 percent from 1.49 million in 2017 to 2.05 million last year, according to the Ministry of Health and Welfare Wednesday.

Economic hardships, the Covid-19 pandemic, and lower standards to go on welfare contributed to the increases. So did an increase in the minimum wage, which forced many businesses to lay off staff.

Welfare recipients capable of working have often gotten jobs through self-support centers, run by local district offices and governments. In the past, these were usually middle aged people.

“The number of participants in their 20s and 30s increased as it became difficult to find a job or start a business,” said Kim Hye-in, head of the self-support division of the Welfare Ministry.

Some welfare recipients aren’t even able to get jobs through the self-support centers.

An official from the center said, "Since the outbreak of Covid-19, the number of people on the waiting list has surged, and many of them seem to have reached their financial limits."

Song Hyeon-jeong, a planning and management team deputy director at the Korea Development Institute for Self-Sufficiency and Welfare, said, "In general, young basic livelihood recipients are likely to have been exposed to poverty in childhood, so they may face emotional and social difficulties. Short-term subsidies are important, but tailored education, work experience, and asset building are also important for them. There should be an increase in self-support programs that provide comprehensive support.”

However, he says, "As long as I can get work through the self-support center, I think I'll be okay just living like this.”