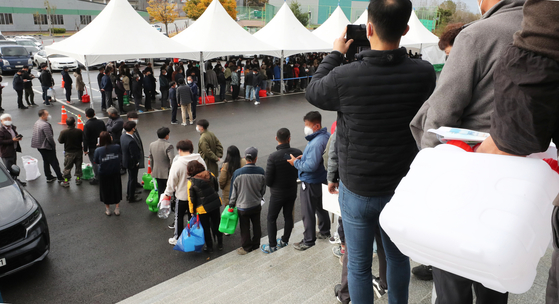 People are waiting in a long queue Tuesday to buy diesel exhaust fluid (DEF) amid a critical shortage from China’s export restrictions. [YONHAP]

KIM HYUN-YE
The author is the head of P Team of the JoongAng Ilbo.


These days, this word “crisis” appears too often just to be dismissed as just saying. The Korean dictionary defines it as a “major disturbance” and “serious chaos.” The most commonly mentioned crisis has been a transportation crisis.

For instance, on the day of the college entrance exam, held around the nation all at once, a traffic war takes place every time, with no exception. Students had to leave home before 5 a.m. to arrive at the test site on time. Some argue that the entrance exam should be held on a Sunday.

As graduations and entrance ceremonies are held around the same time, it was not uncommon to see a traffic crisis in the news. It often took as long as 26 hours to get from Seoul to Busan as people travel to visit families for New Year’s Day or the Chuseok harvest holidays.

The crisis became more diversified relatively recently. In 2019, after Japan banned its export of essential materials for semiconductors, the “semiconductor crisis” happened in Korea. Covid-19 also played a part. As masks were sold out due to the sudden pandemic, we experienced a “mask crisis” earlier last year. You needed to present an ID and could only buy two at a time at pharmacies on a designated day of the week based on your birth year. Then, during the “hospital bed crisis,” a patient waiting to be transported died.

Then a lack of Covid-19 vaccines and a shortage of the diesel exhaust fluid (DEF) for diesel vehicles joined the ranks of crisis. The impact is too serious to put the blame on China’s decision to control its export of EDF and urea, a main ingredient for the production of DEF. As it is mostly used in large vehicles such as buses and trucks, the DEF crisis is spreading embers for a shipping crisis, construction crisis and transportation crisis.