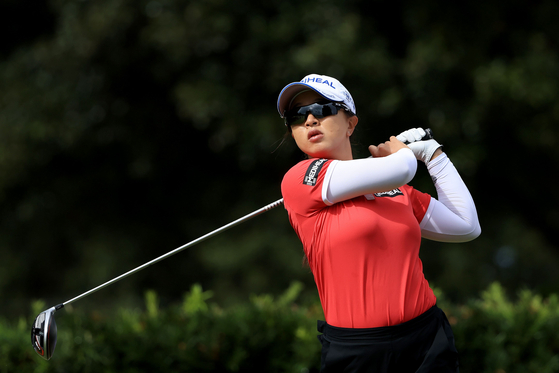 Kim Sei-young plays a shot on the sixth hole during the third round of the Pelican Women's Championship at Pelican Golf Club on Saturday in Belleair, Florida. [GETTY IMAGES/AFP/YONHAP]


Kim Sei-young narrowly fell short of defending her title Sunday at the penultimate LPGA tournament, the Pelican Women's Championship, presented by Konica Minolta and Raymond James at Pelican Golf Club in Bellair, Florida, after a playoff against the winner, Nelly Korda of the United States.

Kim entered the tournament as the defending champion, having won her second consecutive title on the course last time around, carding a 14-under-par, 266.

This season, her runner-up finish on Sunday is her best performance yet. Though Kim has had at least one victory in each of the last six seasons, she is still searching for her first title this year, with now just one event remaining on the schedule. 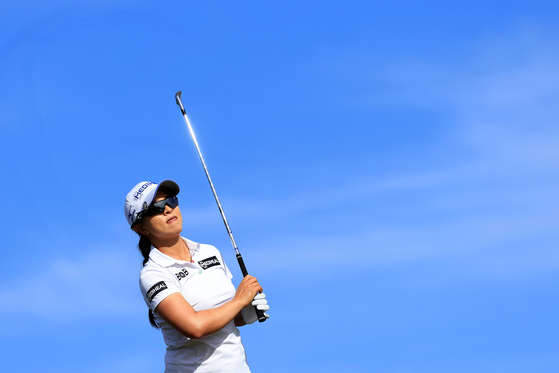 Kim Sei-young plays a shot on the 12th hole during the final round of the Pelican Women's Championship at Pelican Golf Club on Sunday in Belleair, Florida. [GETTY IMAGES/AFP/YONHAP]


On the first day of the tournament, Kim carded a bogeyless 64 and took the second position. She birdied the first three holes in a row, then birdied the par-5 seventh and even added an eagle in the par-5 14th. Kim had five birdies and two bogies on the second day to card a 67, then had another bogeyless round with five birdies to tie for fourth position on moving day. She was able to carry that form into the last hole of the last round, sinking a difficult putt to birdie the last hole and join three other golfers, Korda and Lexi Thompson of the United States and Lydia Ko of New Zealand, tied for first with a total score of 17-under-par, 263. The score set a new 72-hole scoring record for Pelican Women's Championship.

The four golfers headed back to the 18th hole for a four-way playoff, during which Korda emerged victorious as she was the only one to birdie the first playoff hole. It was a redeeming shot for the American, after slipping in the second-to-last hole. On the par-4, seventh, her iron shot veered left of the green and rolled downhill. Her next shot missed the green once again, the ball landing inside the bunker. While she finally made it onto the green, she missed her first and second putt, carding a triple-bogey. 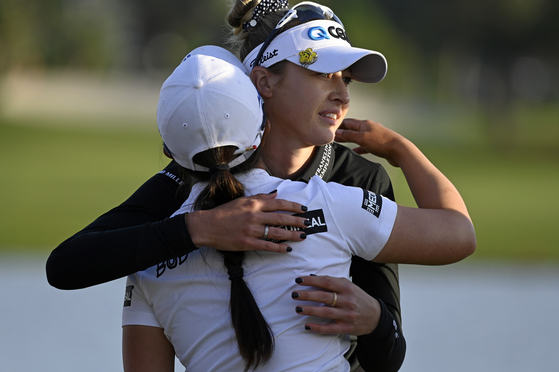 Kim Sei-young hugs Nelly Korda of the United States after Korda sank a birdie putt on the 18th green during the first hole of sudden-death after a four-way tie in the final round of the LPGA Pelican Women's Championship golf tournament at Pelican Golf Club on Sunday in Belleair, Florida. [AP/YONHAP]


But the triple-bogey did not pull down the No. 1, who secured her fourth victory of the season and seventh of her career. There are now only two LPGA golfers with four wins this season, Korda and Ko Jin-young.

Ko won her first title of the season at the Volunteers America Classic in July, then took a win at the Cambia Portland Classic in September. She kept on going, winning two consecutive titles: the Cognizant Founders Cup and the most recent BMW Ladies Championship.

The last LPGA tournament, the 2021 CME Group Tour Championship, will begin on Thursday as a four-day, 72-hole stroke play event. Ko will play as defending champion, having won the 2020 edition five strokes ahead of compatriot Kim Sei-young, who finished runner-up. Kim Sei-young has also won at the event, in 2019.