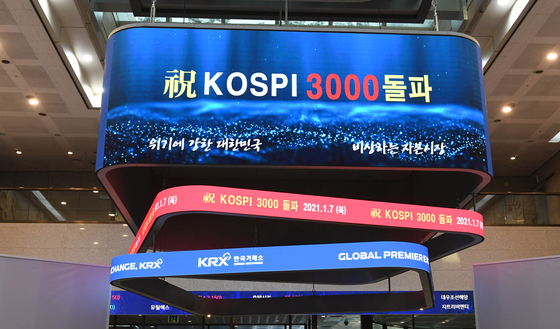 Congratulatory remarks are projected on a digital screen at Korea Exchange in Yeouido, western Seoul, as the Seoul's main bourse hit over 3,000 in its closing price for the first time in history in January [JANG JIN-YOUNG]


Kospi-listed companies had a surprisingly good 2021, with net incomes surging 92.97 percent to 77 trillion won ($65 billion) in the first three quarters, according to the Korea Exchange Wednesday.

Korea Exchange examined 682 Kospi companies that settle accounts in December to produce a report on their overall earnings through the third quarter of this year.

A year earlier, the companies fared much worse. In the first three quarters of 2020, Kospi companies saw cumulative net rise a mere 1.23 percent on-year on revenues that fell 3.91 percent.

Of the 780 Kospi-listed companies that settle accounts in December, some were excluded from the report as there were changes to their status due to mergers and acquisitions or because they were newly listed. Kospi's 47 financial companies were also excluded due to their industry-specific earnings reporting format.

Kospi companies showed strong earnings even without Samsung Electronics, which accounts for roughly 15.3 percent of total revenue of the companies. Excluding the giant electronics maker, Kospi-listed companies posted 90 percent growth in net profit through the third quarter, at 55 trillion won.

Companies overall were more indebted than they were in the previous year.

At the end of the third quarter, their cumulative debt-to-equity ratio hit 68.91 percent, an increase of 1.11 percentage points from the end of last year.

By industry, textiles and garments saw explosive on-year growth in net of 474.37 percent through the end of September. Steel and metals were right behind with 445.29 percent. On the flip side, net profit by companies in the food and beverage industry fell 13.74 percent and in paper and lumber it fell 14.08 percent in the same period.

Among the 682 companies, 565 companies reported profits while the rest were in the red.

Stocks steady despite destruction of liaison office by North