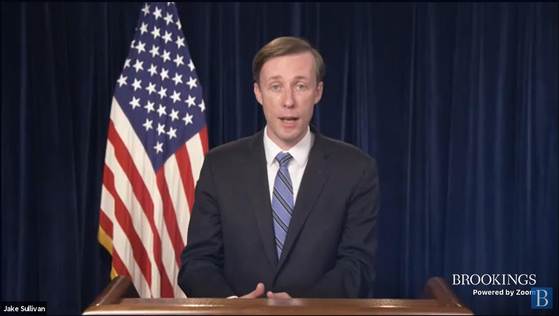 U.S. National Security Adviser Jake Sullivan said Tuesday that North Korea is “one immediate challenge” that the United States and China should work together on, following a summit between the two countries’ leaders.

He described North Korea and Iran as “immediate challenges where the United States and China have worked together historically and are now facing important moments.”

Referring to the North’s recent missile launches, Sullivan said, “We have seen a series of tests by North Korea. The United States has indicated that we are prepared to engage good faith and diplomacy if North Korea is prepared to do the same, so coordination around that issue is also very important.”

Washington has consistently signaled that Beijing could play a larger role in sanctions implementation and encouraging Pyongyang to return to denuclearization negotiations, which have been at a standstill since 2019, especially with the North Korean economy’s heavy dependency on China.

The three-and-a-half hour summit did not lead to any major breakthroughs but was an opportunity for Biden and Xi to try to ease tensions and establish some common ground amid intensifying Sino-U.S. competition.

Sullivan said Biden spoke to Xi “about the need for the United States and China as the two largest economies in the world, as two countries with capacities and responsibilities, to coordinate in order to address issues of global importance where our interests align,” including health security and climate change.

Biden has been “previewing with key Indo-Pacific partners a new regional economic framework that will set new norms and standards in the digital space that will strengthen our supply chains, increase our infrastructure investments and facilitate trade,” Sullivan said.

He continued that the U.S. president has strengthened its alliances with the Republic of Korea and Japan “so that they are as strong as they have been in the history of those two alliances.”

Sullivan added that Biden also stressed the United States is going to work with its allies and partners, and those that share its democratic values, “not against China, but for an affirmative vision of an international system that remains free, open and fair.”

He continued, “We will compete with the full range of our strengths, and we are going to stand up for our values.”

South Korea has often been put in an awkward position amid the stiffening Sino-U.S. rivalry while facing possible economic fallout.

“We have a good working relationship with the government in Beijing,” said South Korean First Vice Minister of Foreign Affairs Choi Jong-kun at a forum in Washington co-hosted by the Center for Strategic and International Studies and the Korea Foundation Monday. “They’re our strategic partners.”

He noted that South Korea’s trade volume “is larger than our trade volume with the United States and Japan put together,” and that the beneficiaries are the South Korean people and conglomerates. But Korea also is "worried" about supply chain resilience and overdependence on China.

Referring to Seoul’s vision to establish a peace structure on the Korean Peninsula, Choi said, “We cannot do it without, obviously, support and backup and consent and consultation from our friends in Washington; but, realistically speaking, we also need partnership from Beijing.”

Sullivan’s remarks come amid reports Tuesday that the Biden administration may diplomatically boycott the Beijing Olympics next February and not send a U.S. delegation to the Winter Games in protest of human rights abuses.

Seoul has viewed the Beijing Olympics as a possible venue for some breakthrough in engagement with Pyongyang, similar to the PyeongChang Winter Games in 2018.