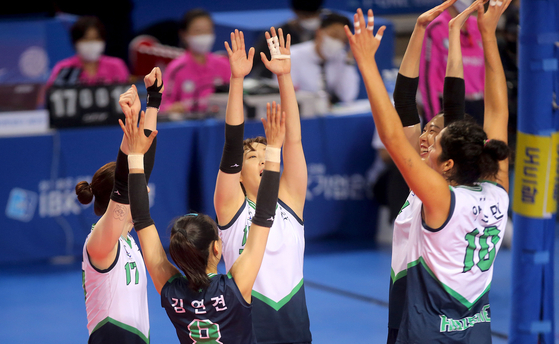 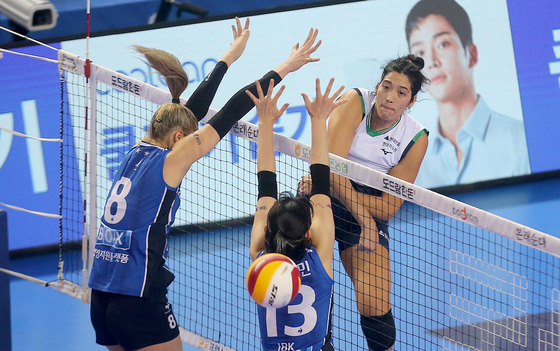 Yassmeen Bedart-Ghani of Hyundai Hillstate, right, attacks during a the match against Industrial Bank of Korea Altos on Saturday at Hwaseong Indoor Arena in Hwaseong, Gyeonggi. [YONHAP]


Suwon Hyundai Engineering & Construction Hillstate clinched a win against the Industrial Bank of Korea Altos on Saturday, extending their winning streak to 10 games and remaining undefeated since the start of the 2021-22 V League season.

Hillstate have dominated since the V League season kicked off on Oct. 16. Before Saturday’s 3-1 win against the Altos, Hillstate’s three matches against GS Caltex Seoul Kixx on Nov. 10, Pepper Savings Bank AI Peppers on Saturday and Korea Expressway Corporation Hi-pass on Wednesday, were complete shutouts, won in three straight sets. Now they have tied their longest winning streak of 10 wins, a record they reached back in both the 2009-10 season and 2010-11 season.

Yaasmeen Bedart-Ghani and Yang Hyo-jin did it for the club against the Altos, with Bedart-Ghani scoring 32 points and Yang scoring 13 points.

Veteran player and Olympian Yang has been popular for some time, but has recently been getting more attention thanks to the women’s national team’s fourth-place finish at the 2020 Tokyo Summer Games.

Yang turned professional in 2007, debuting with Hillstate, and has been playing with the club ever since. Not only is Yang a franchise star, she has topped the board for the most number of blocks for 11 consecutive seasons.

However, her block form wavered last season, and Han Song-yi of Daejeon KGC took the top spot while Yang dropped to fifth. As Hillstate’s most capped player, the club took a blow with Yang’s diminished form and finished at the bottom of the standings last season, with 11 wins and 19 losses.

Hillstate have only won the V League championship title twice, in the 2010-11 season and again in the 2015-16 season. But this season, great teamwork is moving the club back up the standings and also closer to the longest winning streak of all clubs in the women’s V League. Kixx currently holds the record of 14 wins, which they set in the 2009-10 season.

As of press time, Hillstate top the board, KGC are runner-up and the Kixx are in third place.