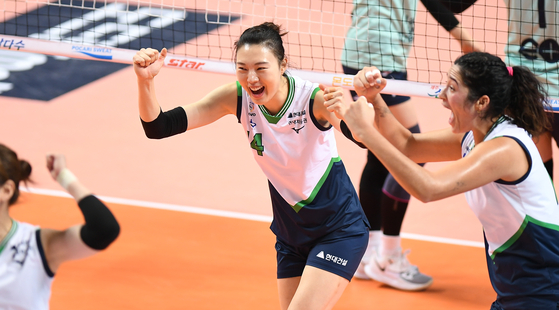 Yang Hyo-jin, center, celebrates with her teammates after scoring against GS Caltex Seoul Kixx at Jangchung Gymnasium in central Seoul on Wednesday. [KOVO]


Suwon Hyundai Engineering & Construction Hillstate have been on a four-win streak since the start of the 2021-22 V League season, clinching a win against GS Caltex Seoul Kixx on Wednesday.

The V League season kicked off on Oct. 16 and Hillstate have won every single match since: 3:1 against the Industrial Bank of Korea Altos on the second day of the season; 3:0 against the Korea Expressway Corporation Hi-pass on Oct. 20; 3:1 against Heungkuk Life Insurance Pink Spiders on Oct. 23; and 3-1 against the Kixx on Wednesday.

The Hillstate made a comeback against the Kixx on Wednesday, conceding the first set 25-15, but taking the next three 25-21, 25-21, 25-23, cutting short the Kixx's search for a third consecutive win.

The Kixx are a strong team — they achieved the first ever treble in women’s professional volleyball history this March, taking the Championship title after winning three games of the best-of-five series, after winning the 2020-21 regular season title and also the pre-season KOVO Cup. 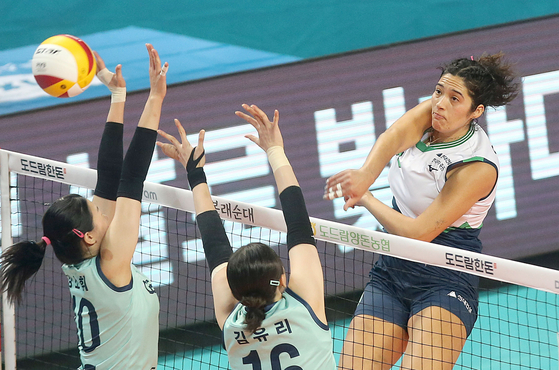 Yassmeen Bedart-Ghani of Hyundai Hillstate, right, attacks during a the match against GS Caltex Seoul Kixx at Jangchung Gymnasium in central Seoul on Wednesday. [YONHAP]


But Hillstate are quickly emerging as the team to beat this season.

Yaasmeen Bedart-Ghani and Yang Hyo-jin did it for the club against the Kixx, with Bedart-Ghani scoring 28 points and Yang pulling off five blocks and a total of 16 points.

The women’s V League and veteran player Yang have been popular for some time, but have recently gotten more attention than ever thanks to the women’s national team’s fourth-place finish at the 2020 Tokyo Summer Games.

Yang turned professional in 2007, debuting with Hillstate, and has been playing with the club ever since. Not only is Yang a franchise star, she has topped the board for the most number of blocks for 11 consecutive seasons.

However her block form wavered last season, as Han Song-yi of Daejeon KGC took the top seat while Yang stayed at fifth for number of blocks. As Hillstate’s most capped player, the club took a blow with Yang’s diminished form and finished at the bottom of the standings last season.

“We lost so many matches last season,” said Yang after the match on Wednesday.

“That is why every match matters to us. We are desperate to win one match after another. No match is taken for granted.”

Even though Yang is no longer part of the national team, having retired alongside veteran volleyball stars Kim Yeon-koung and Kim Su-ji after the Tokyo Games, she says the international experience still affects her performance.

“While training for the Olympics, I focused on detail,” said Yang. “That gave me answers to how to play defense against world class players.

“It would be good to be back at the top with the number of blocks. Though I won't be too disappointed if I can't achieve it, my goal is to be back at No. 1. If I do my part, the No. 1 title will follow.”