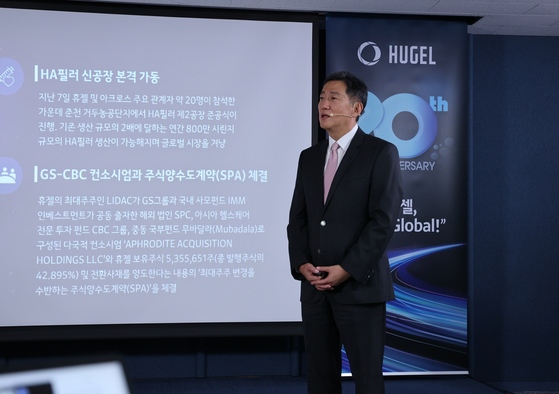 
Hugel, Korea's largest botulinum toxin maker, wants 80 percent of its sales to come from overseas by 2025.

It was one of the goals Sohn Ji-hoon, CEO of Hugel, revealed during an online celebration marking the company’s 20th anniversary held on Friday.

Last year, half of sales came from foreign markets. The company aims to increase that to 80 percent by 2025.

Hugel has overseas subsidiaries in China and Taiwan. Its botulinum toxin product — popularly known by the name Letybo — was approved in October last year for sale in China, the second largest botulinum toxin market after the United States.

It is waiting for the marketing approvals for the product from the U.S. Food and Drug Administration (FDA) and the European Medicines Agency (EMA). The FDA and EMA concluded site inspections of the company’s manufacturing plant in Chuncheon, Gangwon, in August and October, respectively. Hugel has been projecting final EMA approval within the year and in first half of 2022 for FDA.

The botulinum toxin maker also applied for marketing authorization for Canada and Australia in July, and is expecting to gain approvals in second half of next year.

“Hugel successfully entered the Chinese market last year with its innovation technology, and quality products, and now is ready to enter the European and U.S. markets next year,” Sohn said during the event. “We are getting closer to our ultimate goal, which is becoming a global leader in the aesthetics market.”

Established in 2001, the company has been selling its botulinum toxin products to a total of 28 countries. The company is Korea's No. 1 botulinum toxin manufacturer in terms of sales since 2016, followed by No. 2 Medytox and then Daewoong Pharmaceutical.

In 2020, the company achieved 211 billion won ($178 million) in sales, a record high in the company's 20-year history, largely led by the growing sales of botulinum toxin products worldwide. In the third quarter, net profit jumped 98.3 percent on year to 21.1 billion won, while revenue rose 3.2 percent to 55.8 billion won.

The market capitalization of the Kosdaq-listed company was around 1.9 trillion won as of Nov.22.

Pharmaceutical company Ipsen estimates that the global botulinum toxin market will reach $6.5 billion by 2023 from $5.1 billion in 2020.