U.S. ambassador to UN will visit Korea for peacekeeping meeting

U.S. ambassador to UN will visit Korea for peacekeeping meeting 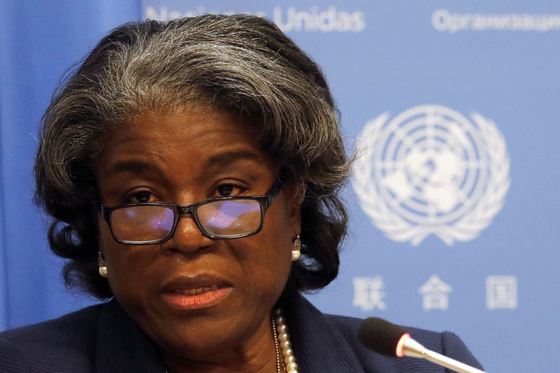 U.S. Ambassador to the United Nations Linda Thomas-Greenfield holds a news conference to mark the start of the U.S. presidency of the UN Security Council at the UN headquarters in New York on March 1. [REUTERS/MIKE SEGAR]


U.S. Ambassador to the United Nations Linda Thomas-Greenfield will be in Korea next month, the third visit of a minister-level official of the Joe Biden administration to Seoul.

Thomas-Greenfield, who is visiting Korea for the first time, will be in Seoul on Dec. 7 and 8 to attend the United Nations peacekeeping operations (PKO) ministerial meeting.

Her visit comes a few months after Secretary of State Antony Blinken and Secretary of Defense Lloyd Austin visited in March.

“The PKO ministerial meeting is usually attended by foreign ministers or defense ministers from each country, so the presence of the UN ambassador from the U.S. adds extra meaning especially as Korea celebrates its 30th anniversary of joining the United Nations this year,” a Foreign Ministry official told the JoongAng Ilbo on Monday.

“These are unlawful activities. They are in violation of multiple Security Council resolutions. And they are unacceptable,” she said in addressing the press on Oct. 20 before the UN Security Council convened to discuss the latest missile tests from North Korea.

Calling on the member states to fulfill their sanctions obligations to prevent North Korea “from accessing the funds, the technology, the knowhow it needs to further develop its unlawful weapons of mass destruction and ballistic missile programs,” she added, “It is time to engage in sustained and substantive dialogue toward the goal of complete denuclearization of the Korean Peninsula.”

The PKO ministerial meeting is being hosted in Korea for the first time and will be joined by some 90 countries’ ministers as well as members of international organizations and the academia, according to the Foreign Ministry.

Hosted by the foreign and defense ministries, the UN Peacekeeping Ministerial meeting will bring to the table multilateral peacekeeping efforts, especially cooperation on the technological front and medical capacity building in peacekeeping operations. The meetings will take place at the Grand Hyatt Seoul and are expected to gather as many as 1,300 people.

“It will be the largest ministerial meeting in Korea since the onset of the pandemic,” said Foreign Minister Chung Eui-yong during a preparatory meeting for the conference on Monday. “We look forward to seeing the ministers reaffirm the importance of UN peacekeeping activities and announce each country's pledges to improve peacekeeping activities.”

The ministry added that every delegation will be matched with a quarantine official who will monitor their condition and ensure that they follow the social distancing rules and other preventive measures.