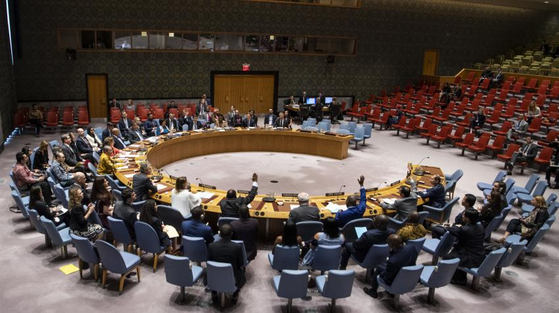 The UN Security Council (UNSC) should address the human rights issues of North Korea in an open session, said U.S. Ambassador Linda Thomas-Greenfield to the United Nations, with representatives of Britain, Estonia, France, Ireland, Japan and Norway in a joint statement following their closed-door meeting Wednesday.

"The people of the DPRK are systematically denied their fundamental freedoms by one of the most repressive and totalitarian regimes in the world," said the statement, using the acronym for the full name of North Korea, the Democratic People's Republic of Korea. "The modern world has no place for such brutality. And it is time for the Council to address it. While we are glad the Security Council discussed this important topic today, we believe it is worthy of a briefing in an open session."

North Korea's human rights issues have been discussed at the UNSC since 2014, when a critical report was issued by the UN Human Rights Council on the situation, however there has been pushback from some members on whether the council is the right venue to discuss such matter.

From 2014 to 2017, the council held open meetings on the topic, but from the following year they have been held behind closed doors.

"The regime's egregious human rights violations, much like its unlawful WMD [weapons of mass destruction] and ballistic missile programs, are destabilizing to international peace and security, and must be prioritized within the Council," read the statement.

"Estonia, France, Ireland, Japan, Norway, the United Kingdom, and the United States urge all Security Council members to support an open briefing next year where we can discuss this dire human rights situation and its implications for peace and security, and focus on the actions the Security Council should take to help the countless individuals impacted by the regime."

All of the parties in support of the joint statement are members of the security council, except Japan.

The statement also called out on the North Korean abduction of Japanese nationals, a thorny issue between the two countries for years.

"The regime has been implicated in international abductions and forced disappearances of Japanese citizens and other nationals, who are kept against their will in the DPRK," said the statement. "We urge the DPRK to resolve all issues related to these abductees, in particular their immediate return."

A public meeting can be held at the UNSC, when at least nine members of its current 15 support the session. In addition to the participants of the joint statement, the council will need the support of three more members. It remains to be seen if South Korea will join.

The call to host an open session at the council to address the North Korean human rights issues comes after the United States imposed fresh sanctions on the North last week.

The U.S. Department of Treasury's Office of Foreign Assets Control designated 15 individuals and 10 entities in several countries around the globe including North Korea, Myanmar and Bangladesh, issuing financial sanctions and visa bans "for their connection to human rights abuse and repression."

This marked the first new sanctions on North Korea over human rights issues since the launch of the Joe Biden administration and coincided with International Human Rights Day.

The UN General Assembly was scheduled to vote on a resolution on the situation of human rights in North Korea in New York on Thursday.