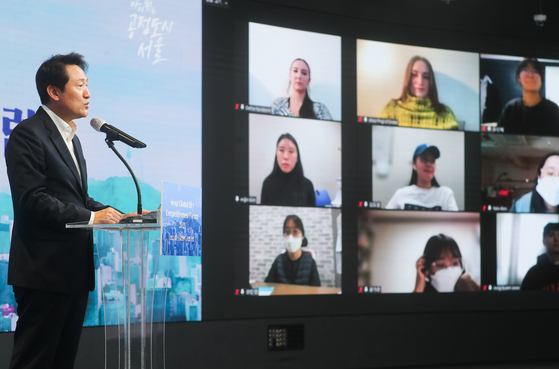 
Scholars from Korea and overseas gathered virtually at a Seoul global forum to discuss developmental strategies with the aim of recovering the capital city’s urban competitiveness.

Seoul Global City Competitiveness Forum 2021, co-hosted by Seoul City and the JoongAng Ilbo, was held under the theme of “Unleash Seoul’s Attractiveness” at Seoul ON Studio at Dongdaemun Design Plaza in central Seoul on Wednesday. The forum was broadcasted live via Seoul City’s YouTube channel.

Strengthening Seoul's urban competitiveness and aiming to become one of the top five global cities is what Seoul Mayor Oh Se-hoon emphasized in Seoul Vision 2030 — his blueprint for the city government's policy direction over the next decade, revealed in September.

“The world has been going through unprecedented social and economic changes during the Covid-19 pandemic for nearly two years now,” Oh said during the opening remarks. “While international cities are doing their best to be resilient, it is absolutely critical that Seoul take the foremost position as a global leader and establish the necessary foundations for urban reform.”

“The attractiveness of a city changes over time, and the synergy must be accompanied by diverse elements,” Park Jang-hee, CEO of the JoongAng Ilbo, co-sponsor of the forum, said.

“At the moment, K-pop, with BTS in the lead, K-dramas such as "Squid Game," and diverse K-culture including Korean food are now becoming increasingly popular all over the world,” he noted. “We now already have the basic foundations for us to show the attractiveness of Seoul.”

Due to the pandemic, the tourism industry and urban macroeconomics are completely changing, said Cowen.

“Right now, what we are seeing in the world is that tourism truly is in flux,” Cowen said. Big changes include the travel restrictions from the pandemic, the return of Chinese and Indian tourists, and the mobile revolution.

He first covered differentiation strategies and attractive points of current successful cities such as Paris, New York City, Tokyo and Singapore. While Seoul, over the long term, has a large potential to grow its tourism as well, Cowen pointed out that there is a reputation problem.

“Outsiders don’t think of Seoul in Korea as having some of the very best food in Asia,” he said. “I think the general problem other than the food not being better known is simply the people don’t exactly have the ability to articulate what is the single reason to want to go to Seoul or Korea.”

The one vocal reason to go that is lacking, Cowen says, could be Korea’s version of Hollywood, and that is: Korean popular culture such as K-pop, K-movies and Korean television shows.

Arturo Bris, director of the Institute for Management Development (IMD) Global Competitiveness Center, first delivered a presentation titled “Changing World, Changing City Competitiveness” and presented crucial factors in urban competitiveness which Seoul will need to be one of the leading cities in this post-Covid era.

“Smart city is not just a sustainable city,” Bris said. “We need to be able to assess to what extent all the smart interventions in a city aim to improve the quality of life and the prosperity of the city’s residents.”

Bris introduced the IMD-SUTD Smart City Index (SCI), which ranks 118 global cities based on their citizens’ perceptions of how technology can improve their lives, as well as on economic and social data retrieved from the UN Human Development Index. According to the report, Seoul ranked 13th, while the second largest city Busan landed at the 37th spot on the global list.

“Once there are certain economic conditions, then obviously technology for a city to be smart, you need the country to be competitive,” he said.

“Technology must have a purpose,” he said. “This purpose may be to increase the prosperity of the citizens.

“Cities approach smartness in different ways to solve the problems the citizens may have […] such as traffic, pollution or security,” he added.

The next presentation was given by Abdo Al Habr, principal at Kearney, who addressed the city competitiveness of Seoul from Kearney’s point of view and co-rumination of common tasks to show reform as a future leading metropolis, under the title “The Global City: Guidance to our Future.”

Among the most significant factors for global competitiveness, the key predictor of future success is human capital, said Al Habr.

“Retaining and attracting a diversity of people and talent is an area that all cities looking to improve their global competitiveness should prioritize,” he said.

Citing overseas cases like that of Australia and Dubai, Al Habr explained how to balance reopening for economic reasons versus remaining closed to reduce the exposure to risk.

“Reducing mobility restrictions and lifting lockdowns has provided economic advantages to these cities and others that have opened sooner rather than later,” he added.

For the way forward, Al Habr said an essential requirement for the success of cities is “prioritizing quality of life.”

Up next, Christopher "Kip" Forbes, vice chairman of Forbes, gave a speech on the anticipation of Seoul.

For the last 30 years, Seoul has experienced rapid changes and is now developed into a world-class city, Forbes said.

“To remain a world-class city requires focus and constant innovation,” he said.

He mentioned the importance of overseas investment and the growth of meetings, incentives, conferences and exhibitions (MICE) facilities.

“Getting more of the investment is one of the best ways to help and improve the city on many levels, […] and I think MICE facilities in Seoul should prepare themselves for the rebound,” he said.

Forbes added, “If Seoul can provide a good quality of life, that supports the city to be more competitive.”