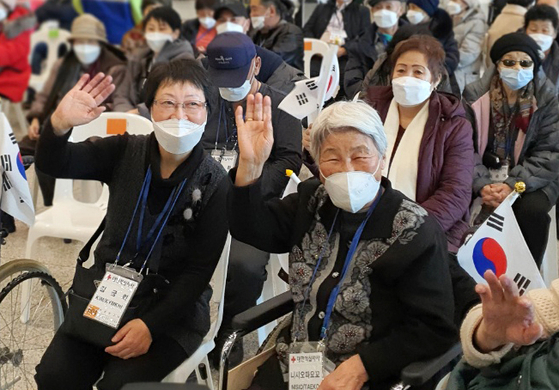 Ethnic Koreans, who were taken to Russia's far eastern island of Sakhalin for forced labor during Japan's 1910-45 colonial rule, and their family members attend a welcoming ceremony at Incheon International Airport on Saturday as they returned to their home country. [NEWS1]

A total of 91 people, including the former forced laborers and their family members, arrived at Incheon International Airport, west of Seoul, under a government support project that will help them get permanent residency here or get dual citizenship if they apply. They all have Russian citizenship.

The average age of the ethnic Koreans who were relocated to Sakhalin during World War II was 88, with the oldest one at age 90.

After a 10-day quarantine, the returnees and their family members will reside in rental homes in Ansan, Gyeonggi, and Incheon, west of the capital.

Under the project designed in line with a special act to support the ethnic Koreans from Sakhalin, the government plans to bring in 260 people in stages between Saturday and Dec. 10.

About 43,000 Koreans are thought to have been forced into labor on Sakhalin Island in the early 1900s.

Many of them are known to have returned to their motherland after Seoul and Moscow forged diplomatic relations in 1990, but there are still such ethnic Koreans living in Russia, Kazakhstan and Ukraine.