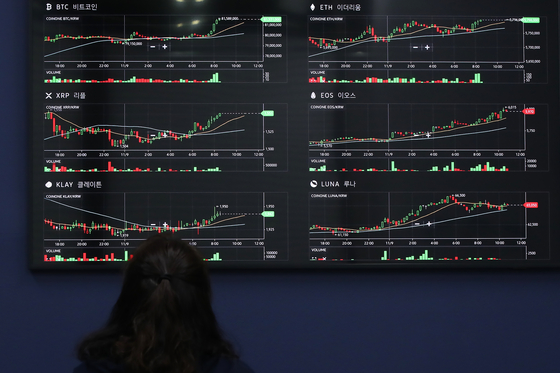 Cryptocurrency exchange board at Coinone in Yongsan, Seoul. The lawmakers have decided to delay taxing profits made from virtual asset investments including bitcoin for a year. The government was planning to tax on such investment Jan. 1 2022. [YONHAP]

The legislature plans to raise an exemption on capital gains tax for real estate sales and suspend a tax on profits from virtual assets including bitcoin for a year.

The bitcoin idea was pushed by the ruling Democratic Party and opposed by the government. It was supported by the main opposition People Power Party. Both parties considered the changes popular in the runup to March's presidential election.

The National Assembly’s Strategy and Finance Committee passed the changes to bills during a meeting Tuesday.

Owners of a single residence who sell it for 1.2 billion won ($1 million) or less will not have to pay capital gains tax. The current law exempts sales of residences for 900 million won or less.

This will be the first major change to the capital gains tax for property sales since it was first applied in 2008.

The DP argued that the current exemption needed to be raised to reflect a spike in real estate prices in recent years.

Real estate may have been one of the biggest failures of the Moon Jae-in administration, which tried to curb prices with a relentless series of measures such as restricting loans and raising taxes, to no avail.

Apartment prices have surged. In Seoul, the average price of an apartment is 1.2 billion won, according to KB Kookmin Bank. In May 2017, when the Moon government took office, the average was 600 million won -- or 50 percent less.

The government hopes that higher taxes would encourage people to sell properties, especially those that owned several, increasing supply.

But the capital gains tax inhibited many people from selling. Many preferred to bequeath the properties to children, which involved lower levels of taxation.

The maximum rate for the capital gains tax is 70 percent whereas the inheritance tax is 50 percent.

According to the National Tax Service, the government collected 224.7 billion won in capital gains tax last year, which was 36 percent less than in 2019.

The two political parties on Tuesday also agreed to delay a tax on virtual asset profits for another year, which was strongly opposed by the government.

Starting Jan. 1, 2022, the government was supposed to tax 20 percent of all profits exceeding 2.5 million won a year from virtual asset investment including bitcoin and ethereum.

The DP has been strongly in favor of delaying that tax. Virtual asset investment has become very popular among young voters.

The DP has argued that the tax authorities need more time to set up a system to tax virtual asset investing. 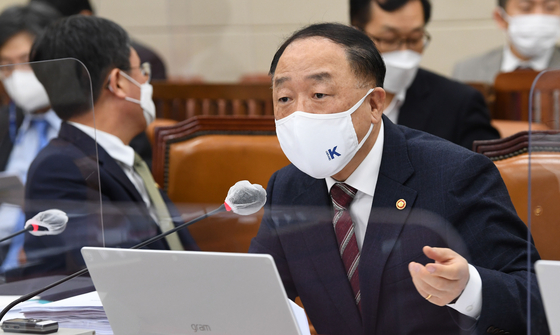 “The government is ready to immediately tax virtual assets,” Hong said Tuesday while attending the committee meeting at the National Assembly.

He reluctantly added that the government will follow any decision made by the National Assembly.

The bills will be submitted for a vote by the National Assembly early next month.

The changes are supposed to appeal to people in their 20s and 30s.