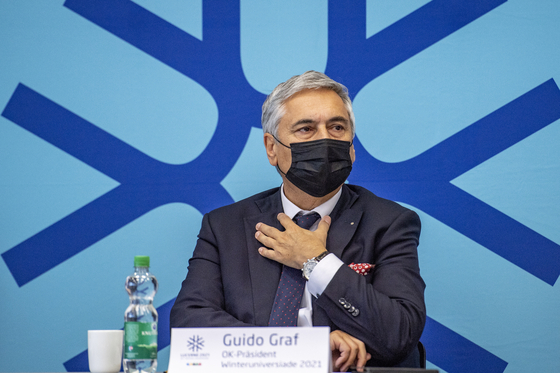 Guido Graf, president of the Winter Universiade 2021 organizing committee, reacts during a press conference on the cancellation of the Lucerne 2021 Winter Universiade in Lucerne, Switzerland, on Monday. The games were scheduled to take place from Dec. 11 to Dec. 21. [EPA/YONHAP]


The 2021 Fédération Internationale du Sport Universitaire (FISU) Winter Universiade, scheduled to run between Dec. 11 to 21 in six cantons of Switzerland including Lucerne, has been canceled due to the appearance of the novel Covid-19 variant Omicron.

The Winter Universiade is organized by FISU for university student-athletes. This "universiade," a portmanteau of the words university and Olympiad, is the largest international winter multi-sport competition for student-athletes. The 11-day-long Winter Universiade is staged every two years at different locations, featuring nine winter sports — alpine skiing, biathlon, cross-country skiing, curling, figure skating, freestyle and freeski, ice hockey, short-track speed skating and snowboard — alongside three additional sports. This year, more than 1,700 athletes were scheduled to join from over 50 countries.

Korea has hosted the Summer Universiade Games twice: in 2003 in Daegu and in 2015 in Gwangju.

Initially, the 2021 Winter Universiade was scheduled to be held from Jan. 21 to Jan. 31 this year but was postponed due to Covid-19.

"In the face of travel restrictions being imposed in Switzerland and all around the world, we have had no other choice but to cancel the Lucerne 2021 Winter Universiade," said FISU Acting President Leonz Eder on Monday.

"This decision was made with a very heavy heart. So many of my fellow Swiss university sports colleagues had already given so much, for so long to this event. But the new travel restrictions mean that staging the event has now been made impossible."

With the next winter edition of the Winter Universiade scheduled for Lake Placid in 2023, the Lucerne Games are being completely canceled as further postponement is not possible.

"Holding the event in December was already a plan B," said Eric Saintrond, FISU secretary general-CEO on Monday.

"Postponing again was not an option. I am deeply saddened to announce that our dream to hold this prestigious event in Switzerland this year is now over. Current times have been difficult for major international sporting organizations, and FISU has unfortunately not been spared from the pandemic."

The cancellation of the Winter Universiade amid the outbreak of the Omicron variant raises questions about the upcoming 2022 Beijing Winter Games scheduled to run from Feb. 4 to Feb. 20 as well as the Chengdu 2021 FISU World University Summer Games scheduled to start next June.