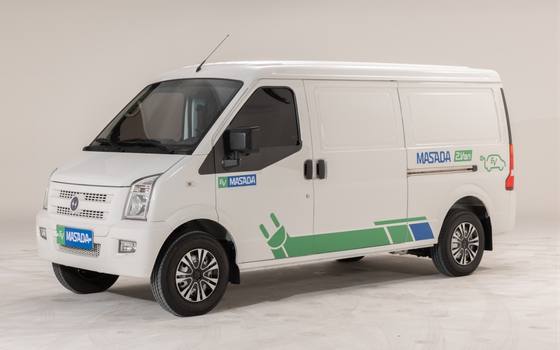 An electric van that will sold by EV KMC next year. The car is fully made in China by DFSK, but imported and sold locally by EV KMC. [EV KMC]

The Siheung, Gyeonggi-based carmaker EV KMC plans to roll out more models of its Masada series, selling an EV truck and a two-seater electric van next year. The trucks and vans were shown at the Seoul Mobility Show held at Kintex in Goyang, Gyeonggi, which runs through Sunday.

Although sold by EV KMC, the vehicles are manufactured by Chinese carmaker DFSK and imported to Korea.

One spokesperson for the brand said the "company plans to have its own customer service program locally so that customers wouldn’t have to put up with inconveniences."

Daechang Motors, a local carmaker best known for its Yakult carts, is importing EV car parts from China to make its soon-to-be-released electric trucks. The imported parts will be used to make the Danigo-C and Danigo-T, which will be sold starting early next year.

The Danigo-C is shorter both in width and length than usual 1-ton trucks. According to the company, the vehicle can drive over 300 kilometers (186 miles) per charge. Hyundai Motor’s EV truck Porter II Electric, known as one of the top-tier electric trucks in the market, can drive 211 kilometers on a single charge, according to a government test.

“The battery is [supplied] by LG Energy Solution and parts related to car safety are made by local companies,” said a spokesperson for Daechang Motors. “Some 60 percent of the manufacturing costs of the EV trucks are for parts from local manufacturers.”

Local carmakers source from China due to its lower prices, which drives prices of electric trucks and vans down. After government subsidies and tax exemptions, people who buy the Danigo-C are expected to pay under 20 million won ($16,970).

Prices for the Masada electric vans aren’t public yet, but are expected to be cheaper than the Danigo-C.

“When internal-combustion-powered cars were the norm, China wasn’t even considered competition,” said Korea Automobile Manufacturers Association Chairman Jung Man-ki. “[China] is getting ready as the market focus changes to EVs, and there is a high possibility that China will tap into the Korean auto market with the EV parts businesses.”

The commercial vehicle market is somewhat neglected by big name manufacturers, which could allow China to expand its presence.

“Hyundai Motor Group is focusing on developing and selling passenger EVs, and if Chinese markers aggressively tap into the local commercial EV market, they could have a big chance of growing rapidly.”