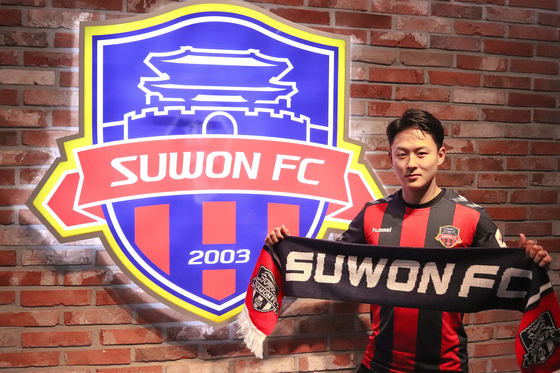 
After just over a week without a team to call home, Lee Seung-woo has signed with K League 1 club Suwon FC.

Suwon announced Friday that Lee has joined the club based in his hometown of Suwon, Gyeonggi, citing his experience and "youthful spirit" and an ongoing bid to upgrade their offense as the main reasons for the former top prospect's recruitment.

Lee has been on the lookout for a new deal since Belgian club Sint-Truiden announced on Nov. 23 that the 23-year-old's contract with the club had been terminated by "mutual agreement."

Lee is a product of the Barcelona football academy and was once considered a footballing prodigy touted as the "Korean Messi."

But despite a strong youth career — Lee appeared for Korean youth teams across a number of tournament and was MVP of the 2014 AFC U-16 Championship — Lee's transition to the adult game has not been smooth.

That move made Lee one of the only Koreans to make it to Italy's Serie A, but again it was short lived. In two years with Verona, Lee made 37 appearances, scoring only twice.

In 2019, Lee joined Belgian side Sint-Truiden. In Belgium, he was given even fewer opportunities, making his debut four months after he joined the club.

Lee spent most of this year on loan to Portuguese side Portimonense, where he made just six appearances.

Lee's arrival in the K League is in line with expectations that his departure from Sint-Truiden would see him step back from European football and concentrate on improving his game in a comparatively less competitive league.

Suwon finished the 2021 season in fifth place in the K League after winning their final game of the season against the Suwon Samsung Bluewings 2-0 on Sunday. Lee Young-jae scored in the 40th minute as the first half ended 1-0. Nine minutes into the second half, Jeong Jae-yong slotted in Suwon's second goal. Lee Seung-woo did not make an appearance during Sunday's match.