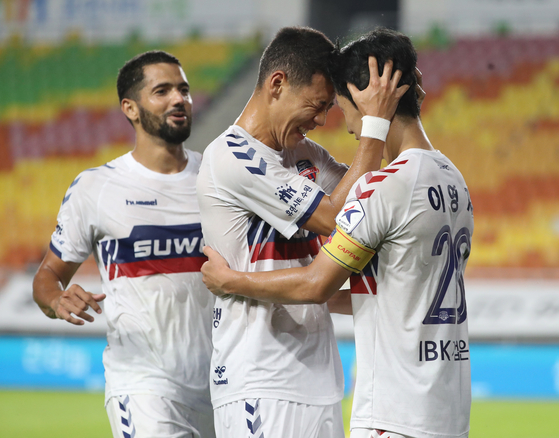 Lee young-jae of Suwon FC, middle, celebrate with his teammates after scoring a winning goal against the Suwon Samsung Bluewings at the Suwon World Cup Stadium in Suwon, Gyeonggi on Tuesday. [ILGAN SPORTS]


Despite the excitement of the ongoing Olympics in Tokyo, Korea's domestic K League is still busy, with six games played over the last week.

This week two Seongnam FC fixtures were missing, the first on July 20 against Incheon United and the second on July 24 against Daegu FC. Seongnam has been struggling with a Covid-19 outbreak that saw 22 people test positive with Covid-19 last week.

On Tuesday, Suwon FC took a 2-1 win over the Suwon Samsung Bluewings at Suwon World Cup Stadium in Suwon, Gyeonggi.

Until the 68th minute, both sides were unable to get anything across. However, things took a bad turn for Suwon FC as Kim Dong-woo scored an own goal in the 69th minute.

Lars Veldwijk was able to score an equalizer in the 81st minute and Lee Young-jae slotted in the winning goal in the 88th minute to give Suwon FC the 2-1 win.

On Wednesday, Gwangju FC took a 3-1 win against Gangwon FC at home.

But just like the match the day before, Gangwon’s only goal was not made by their own player but made by a Gwangju player, Lee Han-do in the last minutes of the game with what was meant to be a clearance that ended up in the back of the net instead.

On Friday, Incheon United defeated the Bluewings 2-1 at Suwon World Cup Stadium. Stefan Mugosa was the one to do it for Incheon, having found the back of the net twice in the second half of the game.

On Sunday, Suwon FC won their second game this week against Ulsan Hyundai Motors at the Ulsan Munsu Football Stadium in Ulsan. Veldwijk was the one to come through for Suwon once again, slotting in two goals in the first half then another in the second half.

On the same day at Chuncheon Songam Leports Town in Gangwon, Gangwon and Jeju United finished with a 2-2 tie after Gangwon scored both their goals in the dying minutes of the match.

The K League 1 will continue this Saturday, when Incheon will face Jeju and Ulsan will face Seoul.