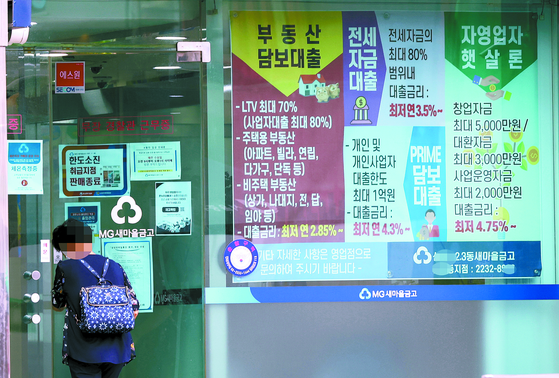 Notices explaining loan guidelines are posted at an MG Community Credit Cooperatives branch in Seoul last month. With the government's tightening of lending to households, it is becoming more difficult for borrowers with weak credit to borrow from non-bank financial institutions. [YONHAP]


Low-income households with weak credit are being pushed to borrow from legal loan sharks as they are shut out by banks and other financial institutions.

Mainstream non-bank financials like savings banks and mutual finance companies have traditionally been more welcoming to these borrowers, but as the government pressures all types of financial institutions to tighten lending, even they are reluctant to extend credit.

If troubled households turn to the third tier of lenders, interest rates for them could run as high 20 percent.

The change in stance by the non-banking financial institutions is largely because people with good credit swarmed to borrow from them as top-tier commercial banks have tightened lending. 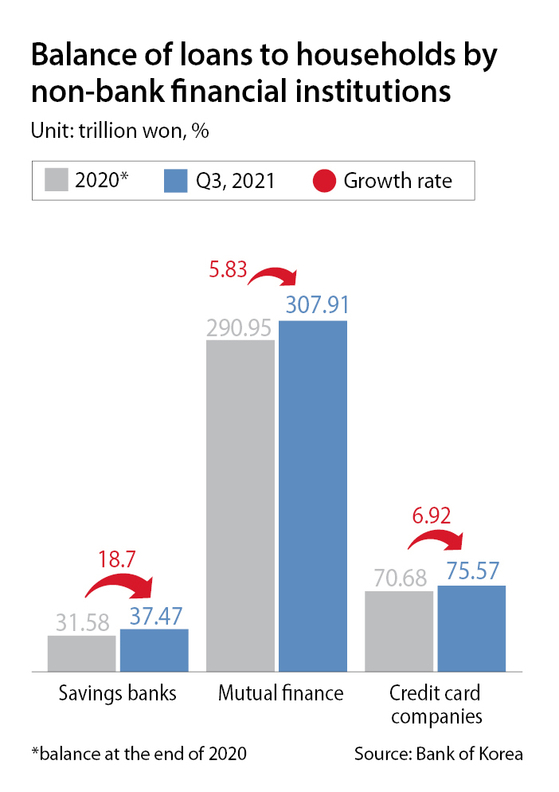 "As we are short on capacity to offer loans, we try to pick out customers with high credit scores for risk management," a source from a local savings bank told the JoongAng Ilbo.

A bigger problem for households is that lending growth will be further restrained next year.

Financial authorities have already outlined plans to curb household debt growth next year by limiting household lending growth at savings banks to 10.8 to 14.8 percent. That target is roughly half of this year's target.

Another issue is the debt service ratio (DSR), which is loan payments divided by borrower's income.

For non-banking financial institutions, the DSR will be reduced from 60 percent to 50 percent next year.

This means principal and interest payments on loans will be limited to half of income from next year for those borrowing from non-banking financial institutions.

The best option left for borrowers with weak credit is private lenders, known in Korean as daebueobja. These legal loan sharks are registered with the Financial Services Commission or local governments, though they are not regulated other than having to keep rates below a certain ceiling.

The interest cap was lowered to 20 percent in July, from the previous 24 percent. As profitability fell following the change, loan sharks have also tightened their screening process.

According to data from the Korea Research Institute for Financial Inclusion, this group of lenders has been tightening lending for a few years. While 12.6 percent of loan requests were approved by them in 2018, that rate fell to 11.8 percent in 2019 and 10.8 percent in 2020.

"If even the second-tier financial institutions close doors to borrowers with weak credit, they don't have anywhere to turn to," said Cho Sung-mok, head of the Korea Research Institute for Financial Inclusion.

"Regulating the total amount of loans, like our government, distorts the market by directing high credit borrowers to second-tier financial institutions and pushing up interest rates by cutting on loan supply," said Shin Sung-hwan, professor of finance at Hongik University. "Policymakers should consider the difficulties of low credit borrowers."