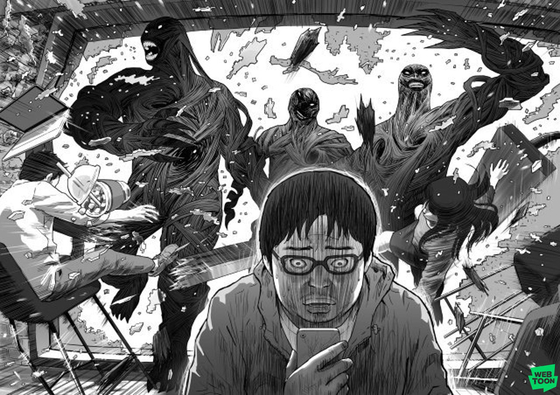 The number of readers of Naver Webtoon's ″Hellbound″ series surged 22 times after the Netflix original of the same title was released on Nov. 19, Naver Webtoon said on Monday. [NAVER WEBTOON]

According to Naver Webtoon, the number of views of "Hellbound" surged 22 times since the Netflix series was released on Nov. 19. The average number of people spending cash on the webtoon series increased by 14-fold.

The "Hellbound" webtoon can be read by paying 200 (17 cents) won per episode or with a coupon. The company did not disclose exact reader or sales figures.

Due to the rising popularity of both the video and webtoon versions of "Hellbound," Naver Webtoon has translated the webtoon into nine languages, including English, Japanese and Thai, the company said. The webtoon series was released in August 2019 and finished in September 2020.

Other webtoons have benefitted from the series they inspired. 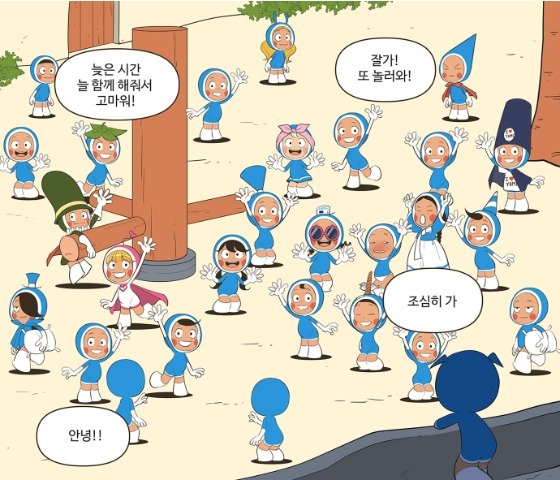 The finishing scene of "Yumi's Cells" where Yumi's Cells wave goodbye to the reader, another cell looking into the village from the outside. [NAVER WEBTOON]


Readership of "Yumi's Cells," another popular Naver Webtoon series, jumped 30-fold after it was adapted into a tvN drama series in September, according to Naver Webtoon. The sales of related merchandise rose by three-fold on Naver's Webtoon Friends online store.

"Sweet Home," which in 2020 was the first Korean Netflix Original to make the top 10 on the streamer's chart in the United States, had 1.2 billion views globally as of January.

"The popularity of stories that are turned into videos led to the increase of people's desire to consume the original work," said Naver CEO Han Seong-sook in a conference call on Jan. 28.

"After the release of "Sweet Home," Naver Webtoon's global user numbers and the viewing of webtoons have been increasing. That has led to the webtoon transaction volume to surpass 820 billion won and monthly active users to break 72 million in 2020, both exceeding our goals."

According to the Korea Creative Content Agency (Kocca), the sales volume of Korean content is estimated at 133.6 trillion won in 2021. Exports are $11.6 billion, 6.8 percent higher than the previous year.

Online streaming is on the rise, with Wavve users up 1 million this year to 11 million.

"Foreign platforms such as Netflix, Disney+ and Apple TV+ will invest more in Korean content production next year," read a Nov. 29 report from SK Securities.

"Recent releases such as "Squid Game" and "Hellbound" have proven their successes, and there are more works that are targeted for online video platforms to come next year."