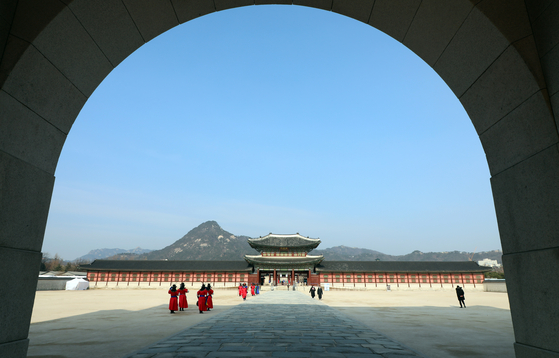 Gyeongbok Palace was restored over the past 30 years. [NEWS1]


PARK JIN-SEOK
The author is a national news editor of the JoongAng Ilbo.

Exclamations that could only be heard on television shows burst out. Two years ago, I had to “treat” jetlagged Harvard Business School students to Gyeongbok Palace in central Seoul. As we toured the palace, the initially bored students became more interested and were completely mesmerized by the time the tour wrapped up.

They were fascinated by Gyeonghoeru Pavilion, our last stop. The pond and the pavilion were the highlight of the tour. But only 30 years ago, the palace evoked no admiration. It was quite shabby as the devastation from the Japanese colonial period was not restored.

In 1867, the fourth year of King Gojong, Prince Regent Heungseon carried out a restoration project, rebuilding more than 500 buildings in the space that were in ruins for nearly 300 years.

But the glory did not last. The Japanese Government-General of Korea built a gigantic office building at Gwanghwamun, the main gate of the palace, and demolished many buildings. The palace survived with only 36 buildings and got little attention as the people were busy making a living after the liberation.

The restoration started in 1991. Starting with Gangnyeongjeon and Gyotaejeon, restoration continued through Gwanghwamun, Donggung, Heungryemun, Taewonjeon, Geoncheonggung and Sojubang, and the palace began to look grand. Celebrating the 30th anniversary of the restoration, a special exhibition was oepned at the National Palace Museum on Dec. 1.

It would be meaningful to visit the exhibition that will continue until Feb. 27. It will be a perfect visit if you stop at Hyangwonjeong that was recently reopened after restoration.