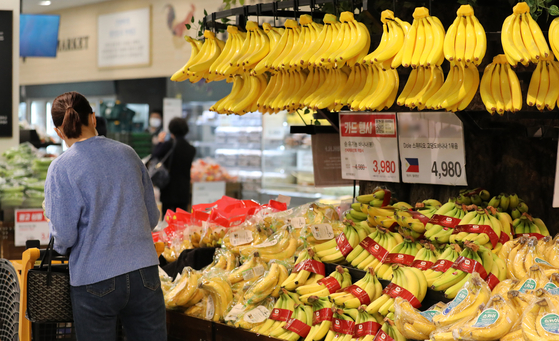 A visitor shops for bananas, imported from the Philippines, at a discount mart in Seoul. [NEWS1]


With supply bottlenecks at ports, food retailers are shifting to air freight to get fruits and meats delivered from abroad.

The shortage of labor in ports has been delaying international shipments. Major U.S. ports, such as the Port of Los Angeles, have been operating 24 hours a day to resolve supply chain issues, but shipment delays have been continuing as cargo volume spike end of year.

It used to take three to four weeks on average to ship fruits from South and North America, but it now takes six to seven weeks. Fruit sometimes overripens or rots during the long trip, and many discount marts have turned to faster air-freight transport.

"With shipment and delivery taking more than a month, there has been cases when fruit rotted or became less fresh before it arrived in Korea," said a spokesperson for Emart. "Rather than shipping by sea, we are working fast to increase the proportion of air shipments."

Emart transported 40 percent of its foreign fruits by air this year as of Wednesday, compared to less than 15 percent last year.

It gets 12 tons of California grapes delivered by plane every week. On the plane, it takes three to four days to arrive in Korea compared to 20 to 30 days it needed when shipped by surface. Chilean cherries are also delivered by plane. The cherries used to take 40 days by ship, but now takes about five days to arrive in Korea. Chilean blueberries took more than 40 days on ship, but now take only four. 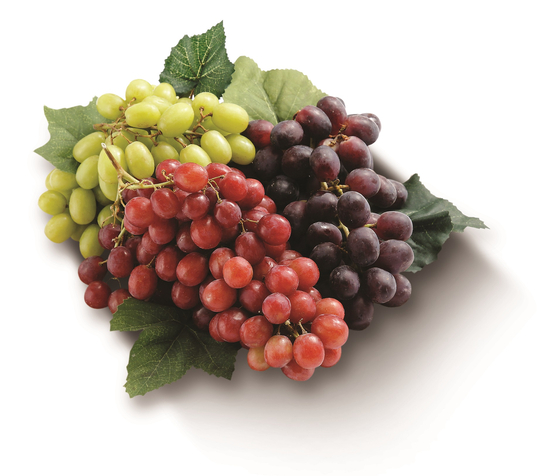 Grapes imported from the United States and sold at Emart [EMART]


"When fruits arrive in Korea, we immediately sort and package them at Emart's fresh food processing center," said a spokesperson for Emart. "It takes less than a week for the fruits to arrive at each of our branches from the country of origin, and it's fresher than getting them via ocean freight."

Lotte Mart is getting its grapes, cherries, mangoes and durians delivered on plane from the United States and South America.

Homeplus is getting steaks flown in.

"There is high demand for meat as the end of year approaches," said a spokesperson for Homeplus. "There are a lot of uncertainties in ocean freight transport, so we are getting steaks, such as T-bone and tomahawk steaks, delivered on plane."

Air freight is expensive, but companies are willing to pay. Heaps of rotten fruit have to be thrown away after being shipped by sea, and the loss from spoilage can be greater than the additional costs of air freight.