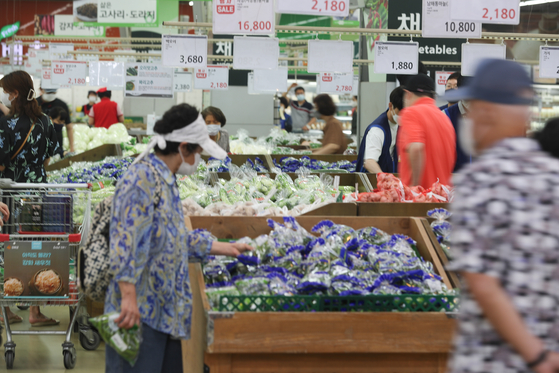 
Park Hye-jin, 44, a housewife in the Mapo District of western Seoul, was surprised to notice the high prices of vegetables and fruit at her local supermarket.

Park’s shopping cart contained some vegetables — lettuce, onion, mushrooms and pumpkin — as well as a tub of ice cream. But they added up to 50,000 won ($43.40) at checkout. Park was forced to put back a couple of items in her cart: a bunch of spinach that cost 4,300 won and three peaches that cost 16,000 won.

“My family really loves summer fruits, but these days I can’t even considering buying them due to their high prices,” said Park.

Likewise for the spinach, which would have been useful for banchan, or side dishes.

“Due to the social distancing guidelines, my husband and children spend more time at home as they work remotely and take online classes, which means I have to cook all meals for them.”

“Now I’m starting to get scared about going grocery shopping.”

The heat this summer didn’t just exhaust humans. Crops got frazzled and that caused their prices to rise.

On fresh food e-commerce site Oasis, a watermelon from Gangwon, which weighs less than 10 kilograms, is selling for 39,200 won. Market Kurly sells a watermelon that weighs more than seven kilograms at about 34,800 won.

Ahead of Malbok, the last of the three hottest days of the year on the lunar calendar, the average price of a chicken was 5,991 won per kilogram on July 30 — the highest price since Jan. 28, 2019, when it peaked 5,992 won. On Malbok, many Koreans eat samgyetang, Korean chicken ginseng soup, as they believe it to be a healthy food for the hot summer. Malbok falls on Aug. 10.

Chicken prices are even higher than at the end of 2020 and the beginning of this year, when domestic poultry farms were swept by the highly pathogenic avian influenza.

Between Jan. 1 and July 29, a total of 189,651 chickens died on domestic farms due to the heat wave, according to the Ministry of Agriculture, Food and Rural Affairs.


The prices of processed food also rose due to rising prices of ingredients. Microwaveable rice, ramyeon and canned foods are on the list.

Since Aug. 1, ramyeon maker Ottogi increased the price of Jin Ramen and two other products an average of 11.9 percent. Rival Nongshim said it will raise the prices of its ramyeon products including Shin Ramyun by an average of 6.8 percent starting Aug. 16.

CJ CheilJedang increased the prices of 20 processed meats like Spam and sausages by 9.5 percent since July 1. In March, bread and cake maker SPC Samlip raised prices on 20 bakery products including Cream Bread by 9 percent. Pulmuone upped the prices of its products like tofu, bean sprouts, and rice cake as well.

Eating out is no solution as restaurants are also raising menu prices as they pay more for vegetables, fruits, meats and other staples.

Seven out of eight of Koreans’ favorite things to eat outside the home were more expensive in June compared to January, according to data compiled by Korea Consumer Agency.

Naengmyeon saw the steepest increase nationwide from 9,000 won to 9,500 won per serving, a 5.6 percent growth. In restaurants in Seoul, the average price of a bowl of naengmyeon already surpassed 10,000 won. A higher price of buckwheat, naengmyeon’s main ingredient, is the biggest reason.

Samgyetang was the only dish that got cheaper. Samgyetang, which cost 14,462 won per serving in January, declined 2.7 percent to 14,077 won in June — despite rising chicken prices.


The Covid-19 pandemic is another reason for price rises, as many farms are struggling due to the shortage of labor.

“The recent price hikes of agricultural products is caused by the climate, as well as the increasing cost of logistics due to the rise in gas prices,” said Chon So-ra, a researcher at the Korea Development Institute.