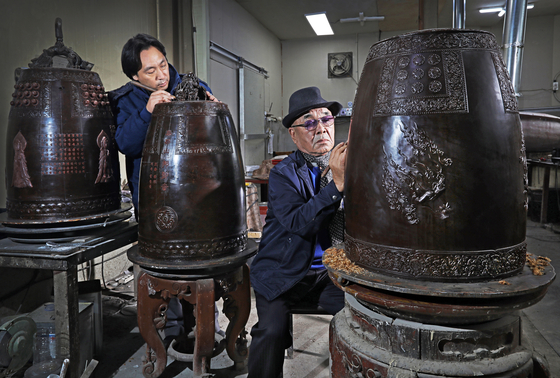 Won Kwang-sik, a "jucheoljang" or master of traditional iron casting, and Korea’s Intangible Cultural Heritage No. 112, is in the process of wax modeling to make a temple bell with his son Won Chun-soo at their bell-making company Sungjongsa in Jincheon, North Chungcheong. [PARK SANG-MOON]


On the last night of every year, Koreans gather at the Bosingak Belfry in Jongno District, central Seoul, to see the ritual ringing of the bell 33 times when the clock strikes midnight.

The bell currently at the belfry is a replica created in 1985 to replace the original Bosingak Bell, Korea’s National Treasure No. 2 made in 1468, which cracked after centuries. The old bell is now at the National Museum of Korea.

The man who made the replica of one of Korea’s most iconic bells is Won Kwang-sik, a jucheoljang — master of traditional iron casting — and Intangible Cultural Heritage No. 112. 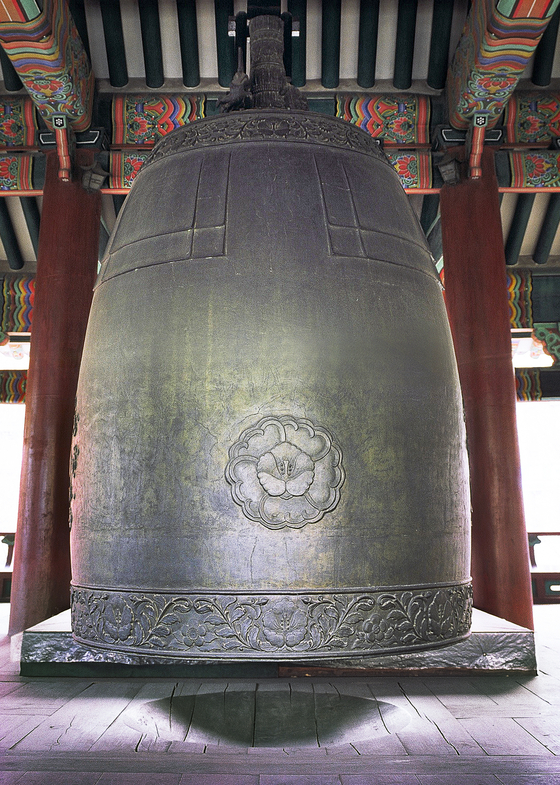 The current bell at the historic Bosingak Belfry in Jongno District, central Seoul, was made by Won in 1985. [PARK SANG-MOON]

Not only that, he created most of the large bells seen at well-known Buddhist temples in Korea, including Haein, Hwaeom, Ssanggye, Beomeo, Tongdo, Beopju, Sudeok, Yongju and Geumsan temples. He has made around 8,000 temple bells over the past six decades.

Born in Hwaseong, Gyeonggi, Won started working at his third cousin Won Guk-jin's metal foundry at the age of 17. That’s where he started his lifelong love story with bells.

After finishing his mandatory military service, he officially joined Guk-jin’s temple bell-manufacturing company Sungjongsa and dedicated himself to learning the art.

Guk-jin was a harsh teacher, unforgiving of even the smallest mistakes. Every technique had to be perfected, or Won and the other students had to continue practicing with their blood, sweat and tears. Under strict tutelage, Won acquired skills for bell-making such as sculpting, designing and iron casting, one by one. 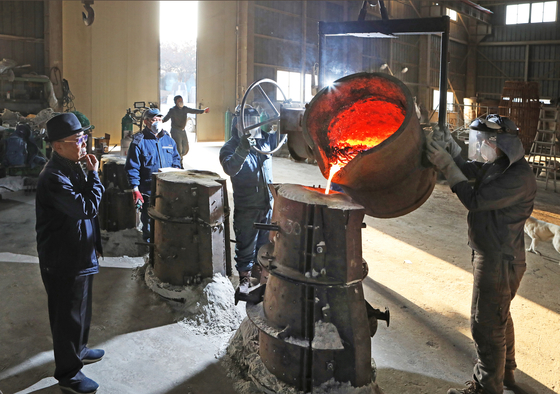 
But when he was 28, Won was met with the greatest crisis of his life; While casting iron, the molten metal splattered into his right eye and he lost his vision. His wife was pregnant at the time. As the partial vision loss made it difficult for Won to work, Guk-jin callously fired him from the company. It was a major blow to his self-esteem, but there was nothing Won could do.

Won lived aimlessly for about a year, but he could not stop hearing the imaginary sound of bells ringing in his ears. No longer able to ignore his passion, he moved into Sudeok Temple in Yesan, South Chungcheong, to resume his craft. There, he made a 4-ton (8,000-pound) temple bell over the span of four years which was completed in 1973. Also that year, Guk-jin passed away leaving Won to take over Sungjongsa.

While manufacturing the Sudeok Temple Bell, Won worked with temple bell experts and academics to accumulate knowledge, studying the mechanisms of bell sounds and techniques for bell-making. He would even cast iron on the spot, and if he failed to get the result he wanted, he shattered the sample to properly examine it. 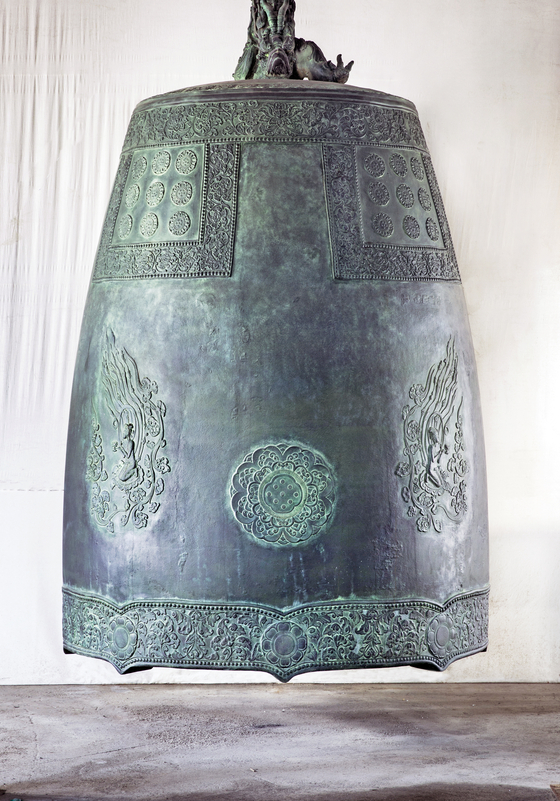 Won made the Silla Great Bell in 2016, a replica of the Sacred Bell of Great King Seongdeok (National Treasure No. 29) from the Silla Dynasty (57 B.C.-A.D. 935), with modern manufacturing technology. [PARK SANG-MOON]


The signature characteristic of Korean temple bells is that they are elaborately decorated and produce a deep, majestic sound. In addition, their sound lingers for a long time and has a clear “beat,” an acoustic phenomenon during which the volume undulates between loud and soft. The beat has traditionally been considered important, so Korean bells are hung about 30 centimeters (12 inches) above the ground and have a pit dug below them to amplify the acoustic effect.

Korean temple bells, known for such uniqueness and beauty, were manufactured through a traditional beeswax casting method. The method, which traces back to the Three Kingdoms Period (57 B.C. to A.D. 668), was lost during Japanese colonial rule (1910-1945) and bell-makers had to resort to Western-style iron casting.

That was until Won restored the traditional method in 1997 after decades of research and trials. He went a step further to integrate modern materials and technology with tradition, creating Sungjongsa’s own unique method of beeswax casting for temple bells. 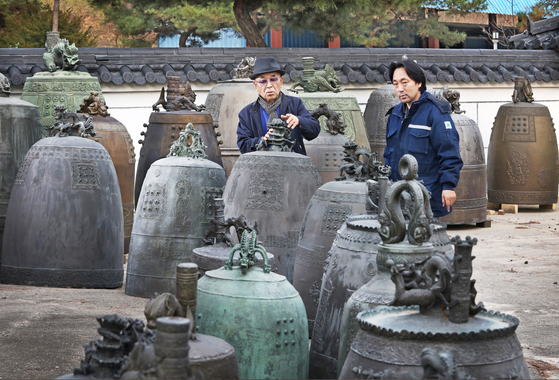 
Won’s trusted right-hand man is his son Won Chun-soo, who became his apprentice and has succeeded the family trade as an iron casting master.

Chun-soo received a master's degree in metal engineering at Japan’s Kindai University and has been continuing his doctorate studies at the University of Seoul. He strives day and night to create the most beautiful bells. While his father mostly makes traditional temple bells, Chun-soo has adopted modern techniques and designs for his bells so that they will appeal to future generations. 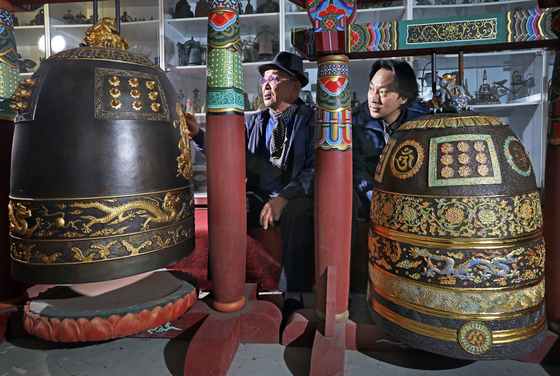 Won and his son [PARK SANG-MOON]


For Won, there is no end to learning. Although he is the most prolific bell-maker in Korean history, he says he still has so much left to learn. He also tells Chun-soo to never stop trying and always do his best with patience because nothing can be accomplished without effort.

Won says the best sound a bell can make is one that “pulls on people's heartstrings.” Bells also have life spans — the more a bell is struck, the more it starts to slowly crack. Won believes when a bell is struck on the final day of its ‘life,’ it produces the most sentimental, touching sound. Even today, bells ring soulfully in the front yard of Sungjongsa.