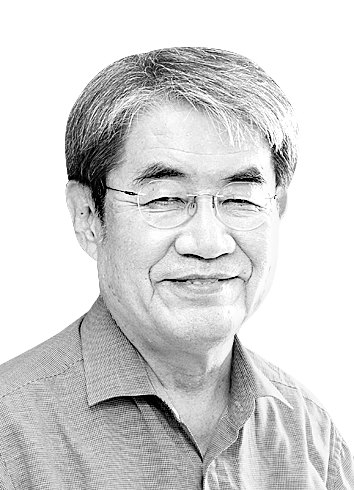 The author is an honorary professor at Sogang University.


The government is pressing ahead headlong with the pursuit of its carbon-neutrality and hydrogen-economy goals. We cannot neglect the global endeavors to address the climate change crisis. But we need not try so hard to show off in vain actions to set an example. Even when carbon neutrality is a necessary goal, the action plan requires careful consideration of feasibility and cost. If a goal is set too ambitiously, it cannot be achieved.

Attention towards renewables such as solar and wind power is important, but they cannot be a panacea. Few countries in the world can provide 70 percent of energy from solar panels and wind farms. Since solar and wind power rely on terribly fickle and volatile climate, we cannot source energy from them whenever we need it. We may be able to run factories and use electricity at home only when there is enough sunlight and wind. Energy storage solutions cannot alone solve the problem.

China can provide a lesson. The country has invested heavily on solar panels and wind farms. Wind farms account for 12.8 percent of the energy in its windy northeast region. Solar panels provide 11.5 percent of China’s energy supply. Coal-fired thermal power stations remain the primary energy source in China. They account for 49.1 percent of power generators and are responsible for 60.8 percent of electricity. 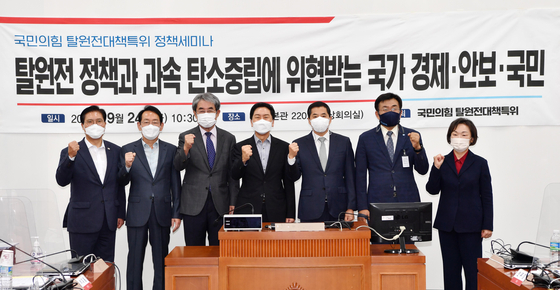 In a seminar on September 24 at the National Assembly, opposition People Power Party (PPP) lawmakers warn about economic and security dangers from the Moon Jae-in administration’s rush to phase out nuclear reactors and achieve carbon neutrality. [LIM HYUN-DONG]

The country’s 20 provinces and cities suffered energy shortages. Factories producing urea, which does not offer much profit, were first to shut down. The blow led to an urea crisis in Korea as it imports the material — which is essential to make diesel exhaust fluid (DEF) to keep diesel vehicles running — mostly from China. Climate setbacks disturbed other countries, too. Wind farms in Texas were frozen due to unseasonably cold weather. Britain, Spain, and Australia also suffered a lot.

Too great expectations about the hydrogen economy are also dangerous. The ad claiming that the nontoxic gas filling 75 percent of the universe can power a car is entirely misleading. The conditions on Earth are completely different. Hydrogen on the earth is a rare resource.

Fortunately, we have a reliable source. Korea’s nuclear reactors — accredited to be the world’s’ best in economy and safety — can be the most reliable means to achieve carbon neutrality. Nuclear is the only existing technology that emits zero greenhouse gases. It can be the sole instrument for the country to meet its goal to reduce emissions by 40 percent by 2030. Korea succeeded in designing the system-integrated modular advanced reactor (SMART) in 2012, the origin of small modular reactors (SMR) pushed by Bill Gates. We must protect the technology from the government’s rush to phase out nuclear reactors.

Britain is eager to install nuclear reactors. We must learn the lesson from the country returning to the nuclear power, which it commercialized first in the world and shunned later to shift to renewables. France which mulled an exit from nuclear energy is also seriously deliberating increasing reactor capacity. Japan which had suspended nuclear reactors after the Fukushima meltdown is also reactivating reactors. Developing technology to enhance safety of reactors and strengthening maintenance system would be the most practical option.